In my hometown of Chicago, Illinois, Halloween decorations switch to Christmas trinkets in early November. By December, the holidays are all anyone can think about! But everyone celebrates them differently, and being a culture nut, I love to learn about the holiday traditions all around me.

Here are five December holidays celebrated by millions of people around the world that I’ll bet you’ve forgotten….or maybe never heard of!

On Krampusnacht partygoers dress up in costume as devils and witches, drinking, participating in a “Krampus Run,” and visiting businesses to scare everyone before the Feast of Saint Nicholas the next day.

Fun fact: Krampusnacht is celebrated in the U.S. too! A Krampuslauf debuted in Virginia.

For Buddhists around the world, Bodhi Day is an important day to remember. It marks the “Day of Enlightenment,” when Siddhartha Gautama sat under a bodhi tree and became “the Awakened One.” From there, Buddhism was born!

This holiday is celebrated all over Asia and by many different branches of Buddhism, like Zen and Theravada. Known as “Rohatsu” in Japan and “Vesak” in India, Bodhi Day can be observed through a variety of different ceremonies and festivals.

Fun fact: “Bodhi” is the Sanskrit word for “enlightened.”

Read next: A Walking Tour of London’s Christmas Lights

Celebrated in Mexico, this holiday is primarily a Catholic feast day. It honors the belief that the Virgin Mary, the patron saint of Mexico, miraculously appeared to a man in Mexico City in the early 1500s. Although it is not a federal holiday, the streets are crowded with festival-makers and pilgrims who come to pray at the famous basilica. While the goal of thousands is to pray, others dress in traditional costumes and dance at fiestas around the country.

What do they eat on the Feast of Our Lady of Guadalupe? This menu from the Catholic Culture website gives you an idea!

Fun fact: The Virgin Mary is said to have spoken in the native Mexican language, Nahuatl, leading thousands of indigenous people to convert to Catholicism.

Ganapati is another name for the elephant god Ganesha. In Hindu mythology, Ganesha represents culture, art, and new beginnings.

Sometimes called the “Hindu Christmas,” Pancha Ganapati consists of a five-day family holiday celebrated by Hindus around the world. Each day, people gather to worship Ganesha at a decorated shrine in their living rooms. All five days are packed with pujas (prayers) to perform, gifts to exchange, and elaborate themed ceremonies commemorating one of the five faces of Lord Ganesh.

For more details about this colourful holiday, check out Hinduism Today’s description!

Fun fact: An important part of Pancha Ganapati is righting past wrongs with family and friends, which means apologizing in front of everyone, so you can begin the new year afresh!

Hogmanay celebrates the Scottish New Year. On New Year’s Eve, people gather in the streets and in each other’s homes to welcome the new year with eating, drinking, storytelling, and gift-giving. Bonfires and fireworks are often part of the celebration as well.

It is a Hogmanay tradition to greet the new year by standing in a circle and singing “Auld Lang Syne.” Another famous tradition at Hogmanay is “first-footing,” where guests are invited to visit different homes after midnight, bearing gifts. Growing up between traditions, I remember celebrating Hogmanay with my Scottish relatives. The memory of standing in a circle of arms around the table and reading my history in my family’s faces stays with me still.

As you celebrate the December holidays in your own way, remember the rich cultural diversity that makes us who we are as global girls!

Read next: Inspiration to plan your trip to Edinburgh

What is your favourite December holiday? Share in the comments how you celebrate! 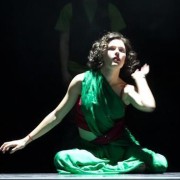 Leanna Johnson
Blogger Leanna is a freelance journalist with the soul of a gypsy who thinks getting lost is the best way to travel. As an AmeriBrit with relatives in four continents, she grew up on African food, the smell of chai and memories of walking through soggy British fields during a rainstorm. Aside from starting her own business, she hosts her own world music radio show, blogs and works on honing her photo and video skills. Her ambitions include starring in a Bollywood film, meeting the stars of her favorite Korean dramas and (finally) learning how to make jalebis. That, and writing from as many corners of the world as possible!

Falling in Love with Walks and Becoming a Flâneuse

“Walking is mapping with your feet.” Lauren Elkin, author of Flâneuse If there’s ...