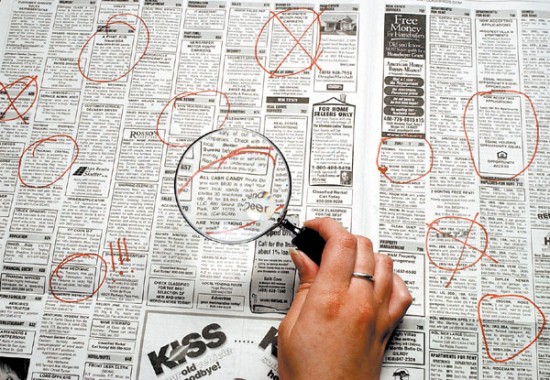 I’m not sure this has been mentioned before, although if it hasn’t been said then let me be the first: the job hunt is just like dating.

I realized this while deep in a bleached and papered thicket of what used to be a beautiful forest of trees. At that point, it had been flattened down to crisp, nearly identical resumes. I scrounged around for the one that I needed, slipping it in my bag.

Sharp black heels sounding against the antique wood floorboards of my Chicago apartment. As I reached the doorway, I looked in the mirror. Underwear lines? Safe. Cute but not-too-provocative top? Solid. The air of a winner today? Honey, that’s just my personality. Or is it?

It’s from here that I attend (punctually) another First Date.

You may think I’m not being serious, but I am. The sweaty palms, the slightly forced “easy laugh” and sense of humor, the talking about yourself like you’re the only person in the world, or, at least, the only person worth talking to.

I laugh to myself. Being in a committed relationship for two years has caused me to forget the dance, and I stumble about this new territory blindly.

The great thing is, we can all pick it up again.

When my interview is over, questions abound in my head. Did I say the right thing? Did I laugh at the right cues? Did I offend that woman while telling her that I think New York is dirty? Did she like me??

And then, there are the phone calls. Or rather, the days spent waiting for that phone call. Those are torture.

The other day I was rejected for my “fall-back” job. The reason was because they believed that my life experience had set me on a different career path. It was too diverse, too “exciting”, they said, and they were afraid that this job would bore me. You may think that this would be a source of frustration for me to be rejected for something I thought I could do blindfolded, but it was actually a huge relief. Now I know that I can’t get a job I don’t want, even if I try. Because even if I do try, people can see right through me.

Another way to look at it is this: the job I love is out there, and it’s waiting for me.

My job soulmate is out there. I just need to find it.

The reason I tell this story, fellow job seekers (or perhaps prospective job seekers), is because at the end of the day, when all the quarters are scrounged from between the couch cushions and the free appetizers at that networking happy hour are consumed, I still believe that we can, and should, do something that gives us satisfaction in life. Perhaps this satisfaction stems from a different source for each person, but it exists in some form for each of us. My own personal satisfaction lies in being challenged, contributing to a global good and producing tangible results. If I don’t do these three things on a regular basis, I can’t even convince my own pillowcase that I’m up for the job. And so, the hunt continues until I am satiated.

Looking for a job is like dating, but it’s also like the famous story of the lion and the gazelle. When the sun rises, both run, whether they are the hunter (avoiding starvation) or the prey (avoiding being dinner). There are losers and there are winners. And there’s always fresh meat.

But then again, I suppose that sounds just like dating, too.

A Feminist Theory of Relativity