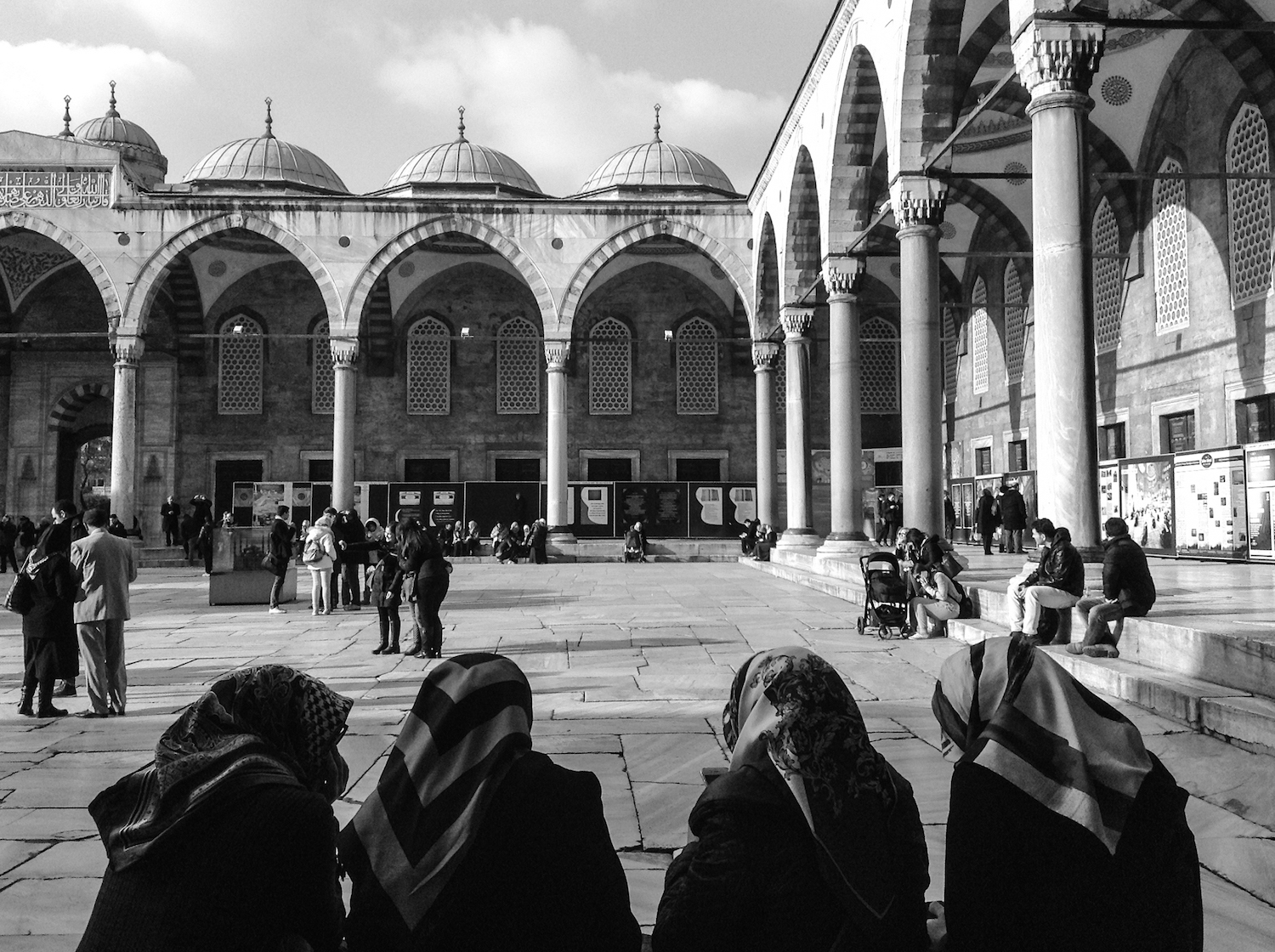 I step into Sultan Ahmet Mosque, head covered, shirt sleeves and pant legs the required length for my gender, just one more tourist visiting the Blue Mosque in Istanbul, and I immediately feel uncomfortable.

Before me is a grand open space, exquisitely tiled ceilings supported by pillars larger than the trunks of most old growth trees back home on Canada’s west coast. The light filtering in through the windows to my right and above glows, not unlike sunshine through a forest’s canopy.

A playful part of me wants to see how many people it would take to encircle one of those columns with our arms.

Despite — or perhaps due to — this parallel between the human-made structure surrounding me and what is likely my favorite natural landscape, I am aware of a growing sense of unease and frustration, which progresses at an alarming rate towards anger.

I am shocked by my reaction, put away my camera after only a measly attempt to capture the architectural details around me, and I stand still.

I watch, I listen, I pay attention to the human element, blue tile mosaics and gold lettering treated like unwanted noise and relegated to the periphery of my vision.

The men stand and mingle, quietly socializing in small groups and worshiping individually within a large, open space to the right, backs turned to me. Boys run around as if in a school yard.

I watch as a little girl enters the area to chase after one of the boys.

She is intercepted and escorted out by a woman, name badge hinting at an official role.

The visitor’s entrance has led me into a wide corridor behind the men. The accumulation of people here is thick, faces and cameras focused right and up, bodies crowding towards the waist-level divide between the tourist and the devout.

I sense the circumference of my personal space shrink, prompting me to hold back a bit to let the bulk of the crowd move farther away.

To my left are the women.

I have to be careful as I describe this secondary section — I find I could not look for more than a few seconds at a time, so strong is my feeling of intrusion. Details are thin, slippery in my memory, and I do not want to paint the wrong image. Oddly enough, I had no qualms staring and pointing my camera to the right just moments before.

The women’s space is significantly smaller than the men’s, smaller even than the thoroughfare reserved for the stream of visitors between the two.

The ceiling lower, the light dimmer, the columns slender polished stone supporting small arches. It is a cozy milieu, and if this were my place of worship and if I had the choice, I would probably naturally gravitate to this section before kneeling in the grander main body of the mosque.

I knew from previous conversations — but no firsthand experience — that women and men occupy separate areas in a mosque.

I was intellectually prepared for what my Canadian upbringing would have me evaluate as oppression, a demeaning segregation, a visual representation of one gender claiming superiority over another.

But the unexpected detail which ignites the flame of my ire is not the gender segregation.

It’s how those of us who are simply there to gawk — the interlopers — are permitted to roam an area larger than that allowed the women at prayer.

Embarrassment crowds in on me as I examine the wealth of open carpet between the two barriers, noticing how the women have the distraction of an unending stream of looky-loos between themselves and the direction of their devotion while the men have the luxury of turning their backs.

I can not bring myself to look left for more than a few brief visual sips because I am ashamed.

I can not hold my gaze, filled with the weight of my life’s privilege gifted from the simple coincidence of birthplace, on these women’s prostrate forms.

My eyes slide across the left side of the mosque, refusing to capture details because I can not understand. Why does this exist? Why do these women participate in a religion that places the value of their roles below the level of a spectator?

And slowly it begins to dawn on me: I will probably never understand no matter how hard I try.

It is a defining moment in my growth as a traveler.

It is natural to look for commonalities between myself and the people who call my vacation spot home, facilitating the development of empathy. It is a whole other matter to learn to empathize in the face of gross differences between fundamental beliefs.

I thought I was already there. My anger shows me otherwise.

At first I thought I was admitting defeat and failing myself as well as these women to my left in the never-ending battle for global equality between genders. But now, over a year since my visit to the Blue Mosque, I see things a bit differently.

The realization that I do not understand has improved my ability to listen, to close my mouth and open my ears, to quieten the voice of judgement.

As if I were once again a student, seated in a lecture hall among hundreds of classmates, straining to hear the words coming from the professor at the front. Like that professor, the women in the mosque are uniquely qualified to teach those who will listen about their needs and desires.

And as I listen, I learn even more about myself.

Many of these countries have gender roles and opportunities similar to those I grew up with. A few contrast strongly against my almost gender-neutral mentality. Each has been a step towards releasing judgement.

In Morocco, I seek out the company of local women at the hammam. After long days wandering the twisting alleys of ancient medinas, when I am no longer sure I can politely pretend to not notice the attentions of masculine gazes and reaching hands, the refuge of this women-only space acts as a balm and soothes the cracks forming along the surface of my traveler’s veneer.

We are buck naked, and I struggle to become comfortable while the Moroccan women around me move about unselfconsciously.

I smile at the irony: the sexually liberated Western woman cannot stop thinking about the towel she reluctantly left in the change room, while those who spend entire days with nothing more than face and hands visible stroll by with the confidence and elegance of supermodels.

It is a grateful glimpse into a form of body positive freedom I find envious.

A freedom which goes far beyond the hurried showering behind closed curtains after a workout at the gym. Underpants tugged on under damp towel and bra snapped into place as I face the wall of lockers, studiously keeping my gaze to myself.

May of this year my feet find their way to Jamaica. In Port Antonio, a woman catches my searching glance at the taxi stand, the only female vendor in the row of huts lining the chaotic roadside pullout, which serves as an orchestration area for drivers trying to fill every last seat in their vans. She offers to use her connections to help me find a ride to the Blue Mountains.

As we wait for the arrival of the driver, I learn of her 28 grandsons, 19 granddaughters, and 8 great grandchildren. We flip through pictures of family on her phone, never a mention of a father to this extended brood.

She asks if I have any children. No. She smiles and says that’s ok. Do I want one of hers? We laugh and I am relieved. I have become weary of explaining my decision to remain childless to individuals in a culture where nothing seems to come before procreation. Her reaction is soothing.

A day later, surrounded by the Blue Mountains with rains pouring down in sheets and waiting for yet another taxi, I start chatting with a woman my age. She has a young boy with her, her son, one of six children still living. I see pride spread across her face covering a shadow of pain.

A traveling companion compliments her on her hairstyle, and she reveals that she is a hairdresser by trade. One of our group has dreads, she points at his head offering to tidy things up a bit.

As she rolls the ropes of blond hair between her palms, she turns to her son and says, “See, you need a skill.” Our group of eclectic European travelers has become part of a life lesson.

I think, “Wow, these women are strong.”

Just a couple of weeks ago, on a rare family visit, I find myself recounting the stories of my time talking with the women in Jamaica. I am marveling at the size of the families and that I had had no idea at how different their family structures were.

Then I see it: The judgement in the eyes of the people listening to the story of my experiences.

“That was me a year ago,” I think to myself. Filtering other people’s lives through my beliefs of how the world should work. Spitting out conclusions like a patronizing calculator, which will never see beyond its programming.

And not even knowing I was doing it.

My confidence stemming from the belief that I am a good person, kind, and generous. Therefore, my conclusions about the world around me are just. But even a good person can get it wrong, unintentionally causing harm with uninformed opinions.

So, my dear sisters, while I may be ill-equipped to truly understand the struggles in your lives, I have two eyes and two ears, and I am finally listening.

I am a nomadic artist who feels at home just about anywhere as long as I have pen and paper in my pack. I try my best to tread lightly on this beautiful planet and illustrate my wanderings on my blog. I hope to encourage others to create more, explore farther, and to develop a healthy relationship with our environment. 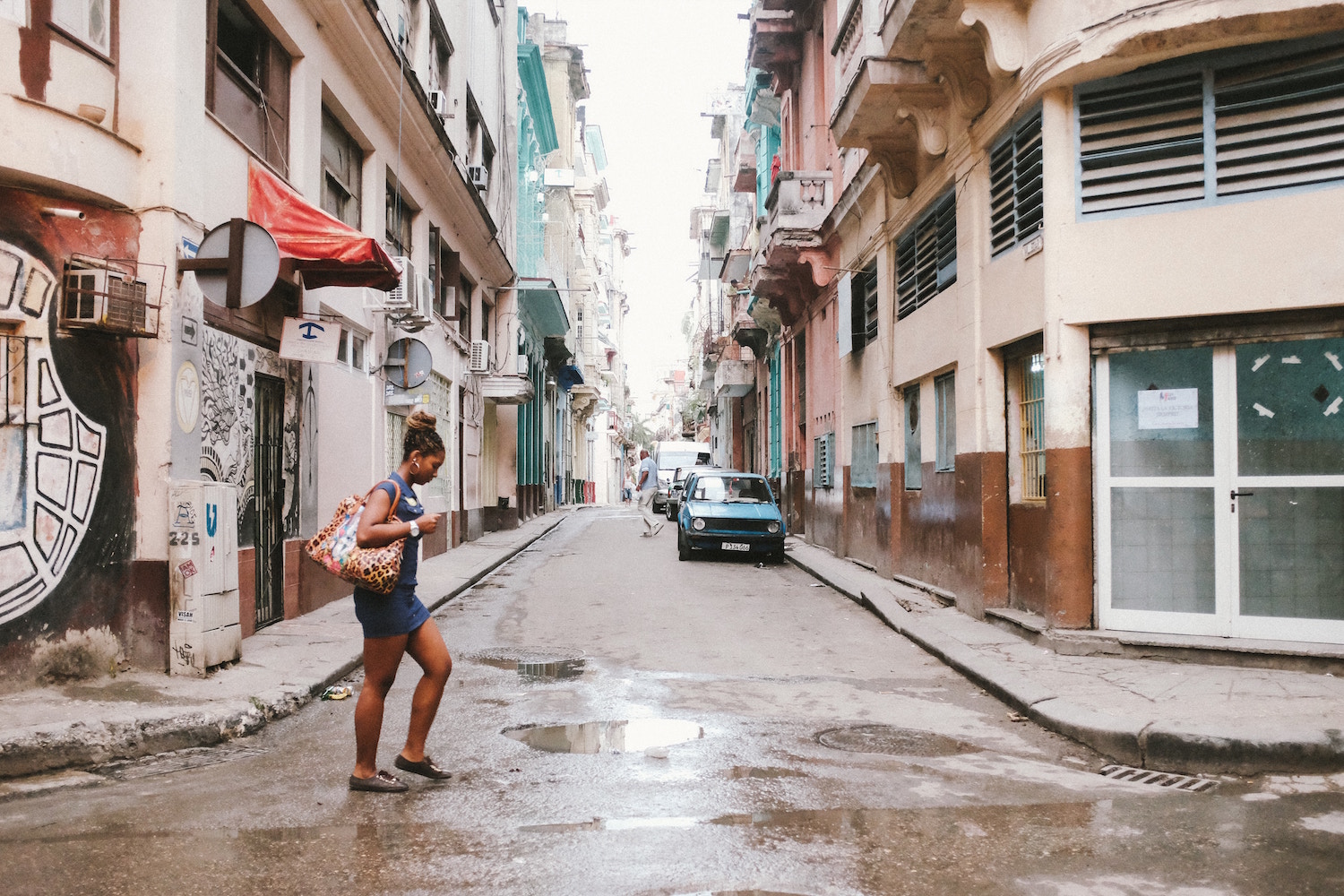 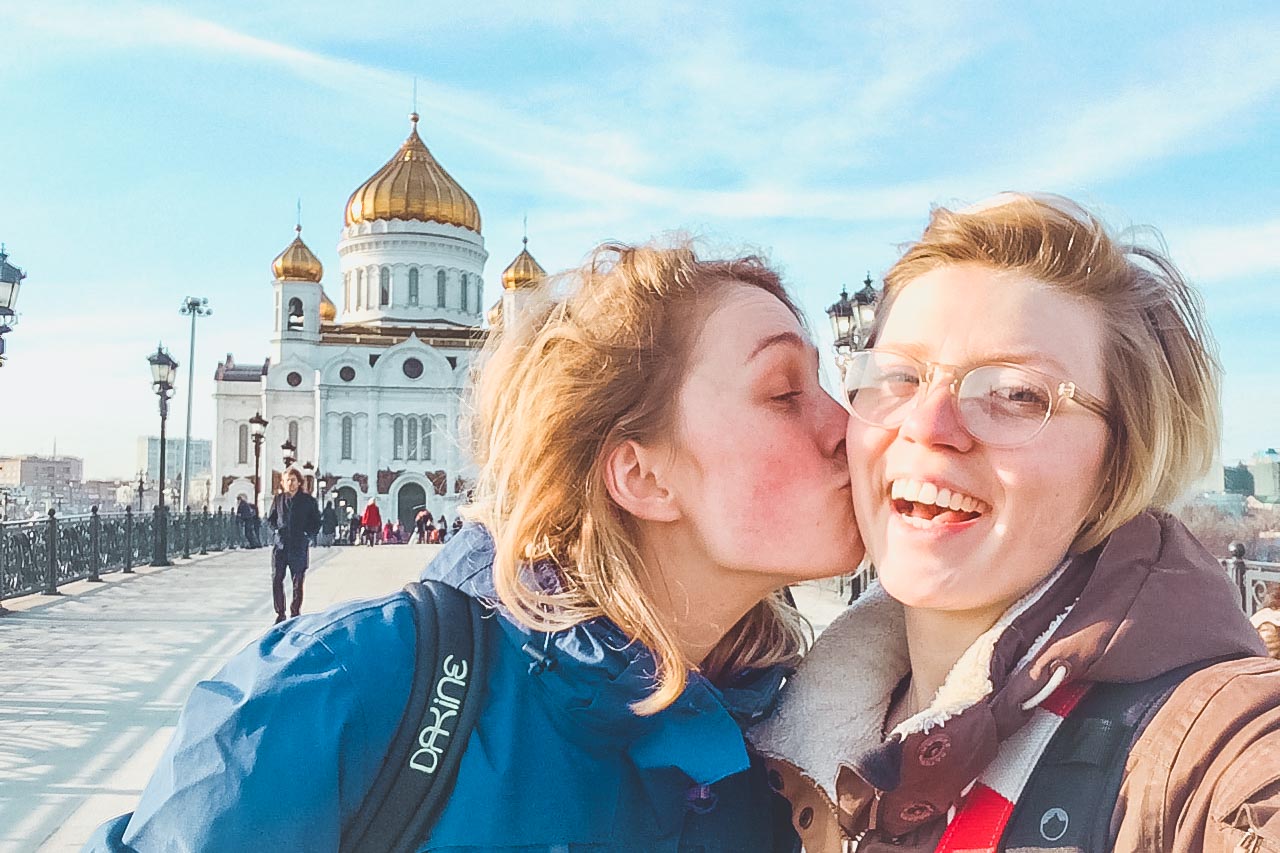 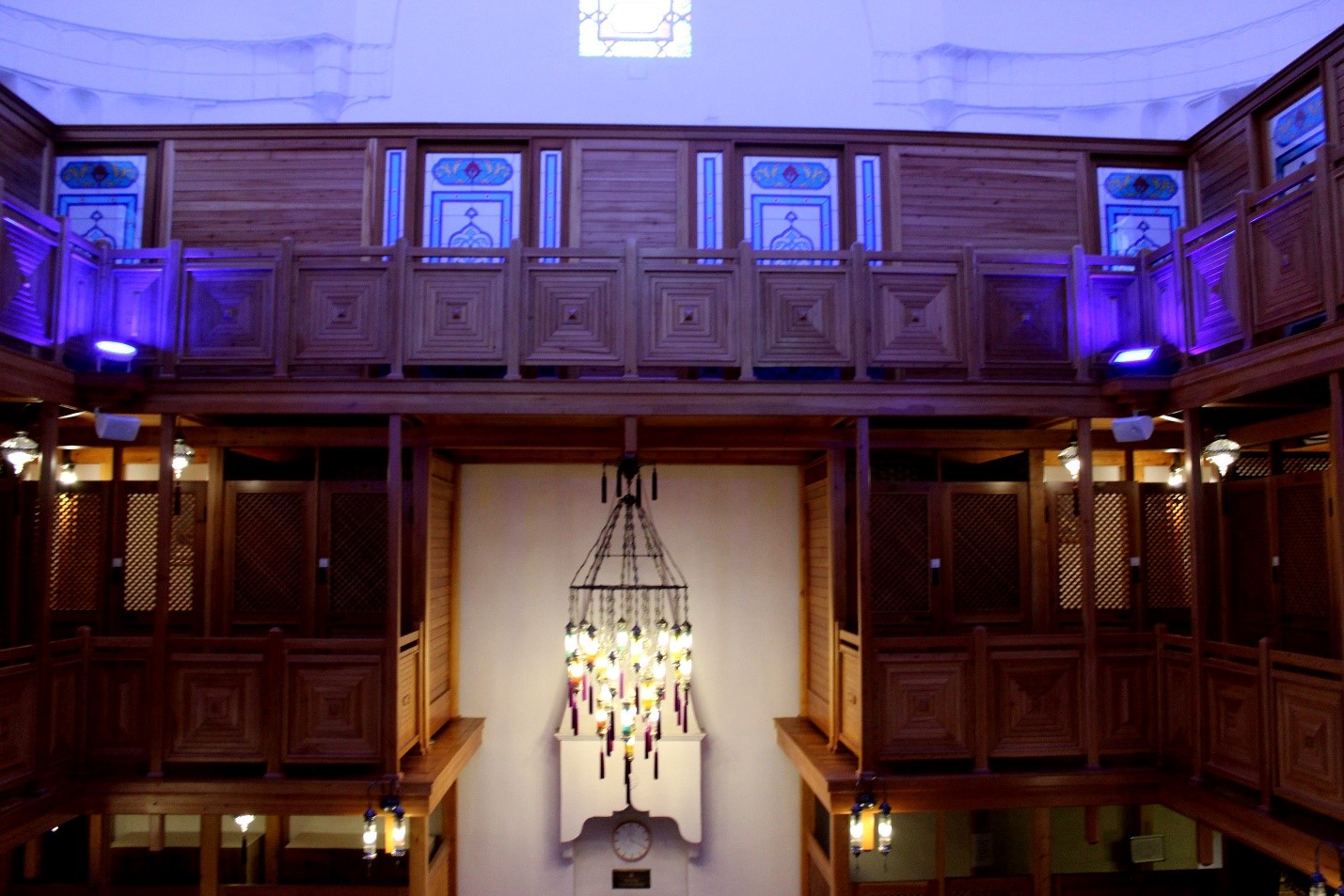