To my sister and I, a long road trip was something of a rite of passage.  A sacred experience, akin to walking across coals to confirm our adult-ness, except we were buying gas station beef jerky in Nevada, 600 miles away from home, and probably sleeping in the back of a Subaru Impreza.

As soon as I had my driver’s license, we began exploring our home state of California in earnest.

At age 16, we’d decide on a whim we craved a hot dog from the Santa Cruz Beach Boardwalk. We’d drive the 40 miles and eat our prize on the beach, delighting in our independence.

By our 20s, our road trips took us farther, to Canada, and down Mexico’s Baja Peninsula where we slept on a deserted beach by the Sea of Cortez. These are the stories we reminisce about a good twenty years later.

Whether it’s a $3 shitty hot dog on the horizon or a better future on a distant coast, that ribbon of asphalt unfolds into a hope of a future uncomplicated by what holds us back at home.

Regrettably, for most of us, road trips are limited to an extraordinary week or two that punctuate our status quo.

What if we could live our whole lives with the freedom a road trip affords us?

A growing number of women are doing just that — shedding their homes, mortgages, and traditional jobs for a full-time life of the open road. These are the bold women living the #vanlife.

As I got to know these women, some in person, some from reading their blogs, I found a diverse group who embrace the lifestyle for a variety of reasons, each as nuanced and unique as each of their stories.

Not all of them grew up in a family of road tripping enthusiasts.

Some wanted to save money. Others wanted to test themselves to see what they were made of.

But above all, almost all craved a freedom they couldn’t obtain at home.

While each woman’s motivation differed, I observed a few loose themes to their narratives, which I take as confirmation that whatever your interest in the van lifestyle, you’ll find a community to share in the experience.

The van life doesn’t have to be a lifelong commitment. Plenty of women are happy to spend a few weeks or months in a van, racking up a lifetime of stories before selling their mobile home, recouping expenses and then embarking on an entirely new challenge.

Yvette, of Wayfaring Kiwi, spent a Canadian summer calling a Ford Club Wagon home before moving onto other adventures (like being the first solo female hiker to finish the Scottish National Trail!) 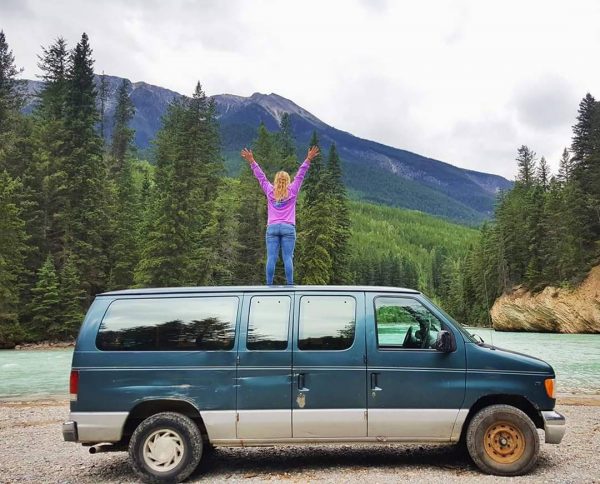 Similarly, after two years of solo living in a “tiny A$$ van in freaking Alaska,” Sarah of Tiny Van, Big Living moved into her Denver rental with her boyfriend, dog, new job, and zero regrets.

She explains, “Van life I personally feel is great for a more traveling lifestyle, but it is really difficult when staying one place long term. After really enjoying my job, the community, and access to the Rocky Mountains I learned I wanted to stay [in Denver] longer than the typical three months.” 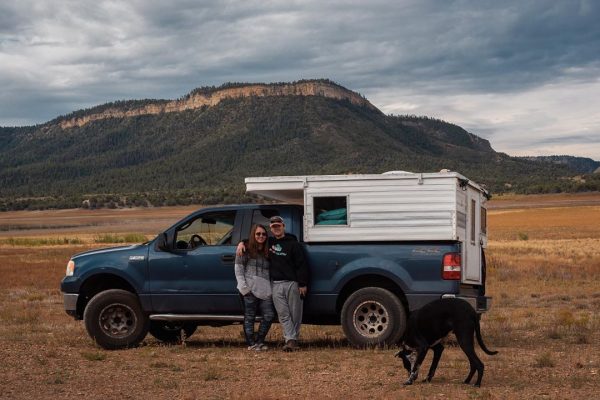 And, what if after a few months or a year of van life you’re not in a hurry to move back to the suburbs? If becoming a permanent solo van dweller is your destiny, you’ll find very good company.

Sydney Ferbache of Divine on the Road, along with her two van pups, live full-time in a converted 2017 Ford Transit Van.

No stranger to van living (this is her second van, losing her first in a breakup!), Sydney makes her living on the road through her blog and podcast where she educates and encourages others to make the leap.

In addition to practical tutorials, her blog explores the emotional challenges of solo female van life, such as combating loneliness. 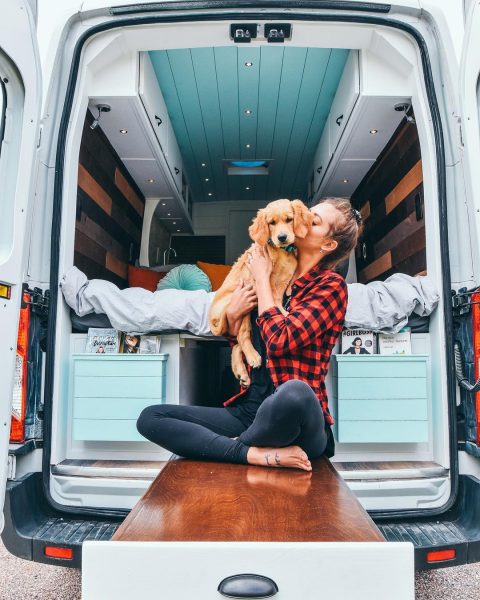 A self-described “halftime van-lifer”, Kristen quit her Washington, DC policy job in 2014 to create Barefoot Theory, and hasn’t looked back from her mission to encourage women to get outside, get the right gear, learn a skill, travel, and hey, live in a van while they’re at it.

Through her website and social media, Kristen promotes conservation values while on the road with features on how to reduce waste while car camping, and even where to go to the toilet when you don’t have one. 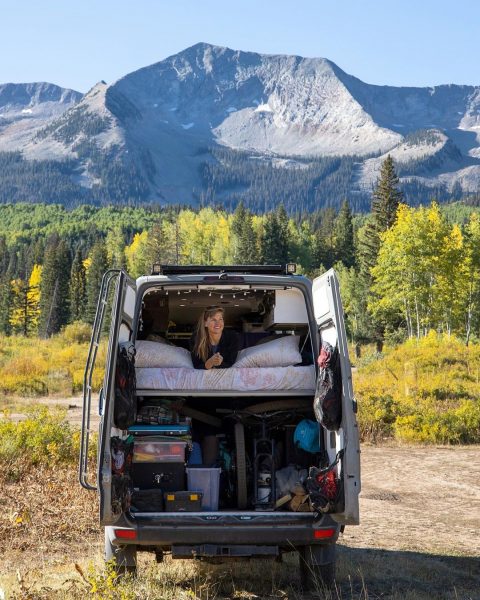 Married, with Children (and usually dogs)

Ready to shed the house in the suburbs, but want to keep the husband and kids? Fair enough, van life need not be a solitary adventure.

Outdoor enthusiast Ching Fu, of Live Small | Ride Free, calls a 100% solar-powered trailer (aka “The Toaster”) her home, along with her two dogs and human partner, Jerud.

They’ve been harnessing the power of the sun since 2015, proving you can live a nomadic, RV lifestyle without relying on fossil fuels.

Both Ching and Jerud earn income via their remote, freelancing jobs, while Ching’s passion for sustainable living also evolved into a side-hustle (on hiatus at the moment) making jewelry crafted from discarded bullet casings found in national forests. 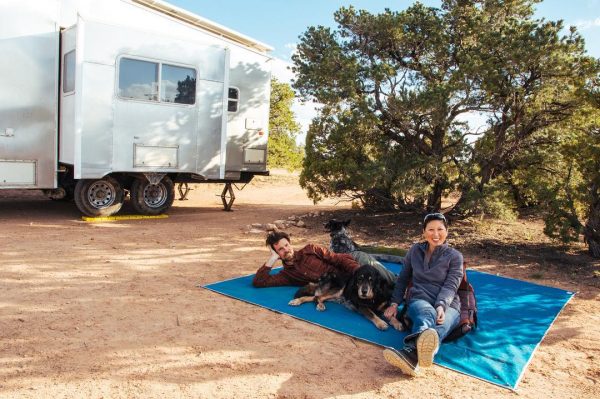 Bionca Smith, of Off the Grid With a Kid, decided to pack in her professional life in San Francisco, to travel the world with her son, adorable Chihuahua named Chili, and 1989 Ford Econoline bought for less than $5,000.

Through a combination of homeschooling, community volunteering, and constant travel, Bionca gifts her son the life experience and education he could never get in a classroom, while inspiring other women of color that nomadic and outdoor lifestyle are adventures are also available to them. 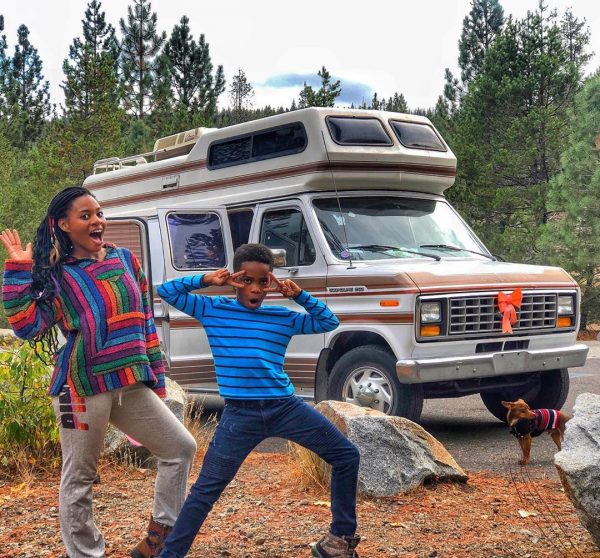 Need more help convincing your family of four to move into a van with you?

Enter the Jinty Fell YouTube channel, where Australian parents Jinty and Chris, not only look fabulous traveling around Australia with their two young children in a Ford Transit van, they are also managing to do it vegan. 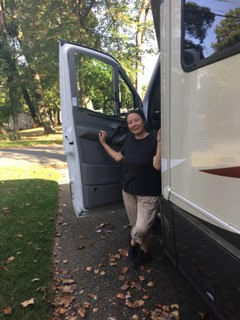 While researching this story, I discovered my former neighbor had just sold her house, bought herself a campervan, and was readying for a life on the road.

Theresa Abell, 65, retired in 2018 from a career as a tax lawyer. I called her to get the scoop on how she went from remodeling a mid-century modern house in the DC suburbs to embracing the van life as a nomadic therapeutic yoga teacher.

Theresa explains, “I turn 66 this year. It really sinks in when you look around and realize time is limited. I’ve seen many people wait too long. I just had a friend who died, out of the blue. I’m lucky enough to be healthy, and financially well (well, once I get this anvil off my neck) and I can live comfortably.”

Theresa is part of a veritable movement among retirees who are embracing a simpler life on the road.

In fact, when I asked Theresa what her friends and family thought of her plan, she laughed. “I was hesitant to tell people – but as I did, people were overwhelmingly positive, and so many people were already doing it, saving up to do it, or know people who are doing it. I thought people would think I was nuts, but it turns out I’m a cliche!”

Theresa will be hitting the road next month in her 2016 Winnebago View with her three dogs. Her first stop: St. Augustine, Florida, and after that, she doesn’t know.

Before we said goodbye, I asked Theresa for any words of advice for those of us not ready to make the leap.

“Do it. I swear to god, the only way to avoid making a mistake is to never do anything. Embrace failure, how else are you going to experience life on this planet? There’s not one right way — different paths can work and just do it.” 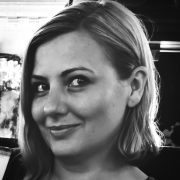 Claire O'Brien
Like all the best journeys, Claire’s career took a few turns before ending up in a most unexpected (but delightful) destination. After 15 years working as a forensic expert, which took her to Sydney, London, Bosnia, and finally Washington, DC., Claire began travel writing. Soon, she was heading up the copywriting team at a major corporate travel brand. When not crafting headlines for her copywriting clients, she contributes freelance content to Go Abroad, Matador Network, Wanderful, RepCo, femLENS and more.