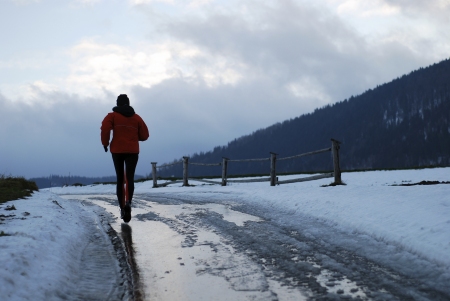 As winter both attacks and teases Boston, I find myself hibernating like a spoiled Californian. But when I think about it, I was so much more active during my winters in Moldova as a Peace Corps Volunteer. I even trained for a marathon during the second winter!

You wouldn’t catch me training for a race this winter. However, that’s only because I’m not at a comfortable base level of fitness to start training right now. When I was training in Moldova, I had gotten comfortable running 3+ miles at least one month before it got too cold for leisurely strolls.

All things considered, I look back fondly at my winter training. Here are five reasons why training for a marathon (or 5k or 10k) during the winter is a brilliant idea:

1. Training for a race was the only way I was guaranteed to get outside at least 3 days per week.

So much of a small village will shut down in the winter. People stay indoors and warm themselves by the fire with family and tea. On some weeks, I really did not leave the house unless it was for a run. It was too cold for a leisurely walk, but I would at least warm up enough to be comfortable while running.

2. Going for a run meant I didn’t have to feel guilty for using three buckets of water, gas for the fire, and three hours of my day to bathe.

When full-body bathing is a process or a huge strain on resources, you tend to avoid getting overly sweaty. Yet, this regular schedule made sure that I “deserved” what I was using, and also that I didn’t feel guilty about taking half of my day to bathe.

3. Being the only soul on an open road when the snow starts to fall will make you feel like you’re in Narnia.

The beauty of the snow-covered countryside is most obvious when you are the only one on the road–a sight I might not have seen if I had not been out for a run, as a walk would not have gotten me as far.

4. It gives you an excuse to go to a warmer climate for the race.

A marathon is an excellent excuse to see a new place. In fact, I can’t imagine training for a race that was not in a new location! Plus, races that are held in January and February almost guarantee a climate warmer than that of Eastern European snow-covered pastures. We ran our race in Morocco!

5. Fight off that winter bulge!

As I mentioned, I sometimes didn’t leave the house if not on a run! Thus, my first winter in Moldova, I gained a good bunch of winter weight. I was practically solitary! So, training for a race gave me the determination and commitment I needed to stay active, healthy, and motivated during the following winter.

Reviewing the positives of wintertime training, I’m motivated again to give it a shot! Running in Boston won’t be as picturesque as running in Moldova, but at least I won’t be the only one crazy enough to “run for fun” in this running-fond city! Compared to Eastern Europe, the paved streets of Boston should make this a breeze! (Right…)

For tips on training in the winter, try this link (or this one for beginners).

Be a Girl Who Travels