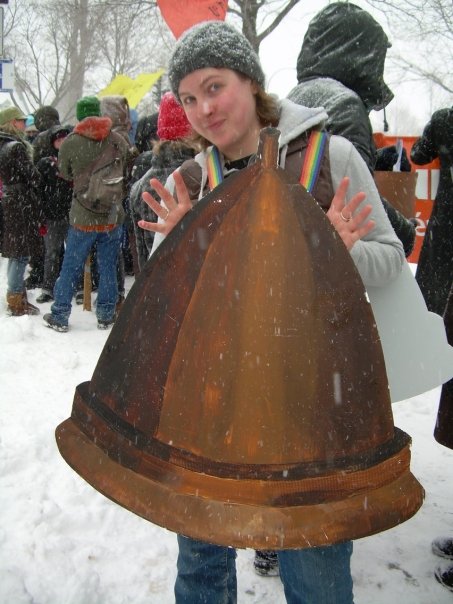 For an American woman, I tend to talk a lot about sex. It’s partly my personality, but it’s also my job. As an advocate who works with survivors of domestic and sexual abuse, I’ve become comfortable discussing the intimate details of peoples’ consensual and not-so-consensual bedroom lives.

Between this and my history as a producer of “The Vagina Monologues” in Montreal, I’m not only extremely comfortable with a wide variety of sexual terminologies and practices, but actively encourage others to become so as well. This is for a number of reasons, and among the biggest is that shame over terminology, body parts, and behaviours makes it that much harder for us to ask for what we want from a sex partner, refuse what we don’t want, and report the things that are done to us anyway. To me, breaking the silence around bodies and behaviours- and the judgment that tends to come with it- is critical in ending the sexual violence directed at far too many people around the world. It’s liberation.

Of course, I’ve learned over time that this version of liberation comes with a downside. To a lot of people, what I do isn’t clever, funny, helpful, or appropriate: it’s rude, disruptive, or unnecessary. And while in arrogant moments I might think I’m simply more evolved than they are, the truth is that change comes from all of us and can’t be forced on any of us.

When I work with clients I have to be prepared to step back from my willingness to use clinical or slang vocabulary and use the words they use- even when the phrasing strikes me as incredibly inappropriate to the acts being described. When talking to people in and out of my job, in and out of my home country, I have to understand that my attitudes towards sex and sexuality are just that: mine. To me, going to a bar and planning on taking home “the drunkest person there” is sexually predatory behaviour. To many others, however, that’s simply Friday night. American law might be on my side in that instance, but popular opinion is not.

This preparedness to meet a person “where they’re at”- this relativity, so to speak- extends to broader cultural contexts. It’s problematic for me to assume that my beliefs about sex, attitudes, and behaviours supersede anyone else’s. Beyond losing the respect my audience might otherwise be prepared to offer me, I demonstrate a lack of respect for their position(s) as well. This is a huge challenge for globalized notions of feminism, I think, because it’s so easy for us to tout our convictions that “our” way is the “right” way. Hell, Emily and I grew up a few houses away from each other, but we have very different opinions on what constitutes bodily respect and liberation. Of course, we both firmly believe that we’re in the right.

It’s very frustrating for me to try and identify a singular stance on global feminism as a result. I’m enraged by the fact that many women don’t have access to safe and reliable birth control, that many countries have victim-blaming systemic responses to sexual assault, and that intimate partner violence is so readily tolerated around the world. I recognize that I live in a country where I can readily address (and hope to change) these problems, moreso than other countries perhaps; at the same time, these aren’t problems exclusive to Everywhere Else. Some Republican candidates for the U.S. Presidency are supportive of a Constitutional amendment to ban abortions. And yet in America, at least, we like to believe that the Everywhere Else rule applies.

The flip side to my frustration is a sense of exasperation with my feminist allies in the U.S. (and other Western countries). Not only do we continue to face some serious sex- and gender-based discrimination challenges on the homefront, but we can’t be bothered to admit that our feminist paradigm (as fuzzy as it often is) doesn’t apply to every single country on the planet. I have a clear memory of watching a classmate campaign against hijab in 8th grade, on behalf of the women forced to wear hijab abroad. There wasn’t anyone in our school who wore it; she simply saw it as her responsibility to “give” these women a voice in the U.S. While I’ve got a healthy dose of revulsion for the way the Taliban, for example, enforced regulations about women’s dress and conduct, I have to ask: is it my (or her) place to speak for their victims? I’m not entirely sure that my classmate even understood that hijab is just one of many types of dress originating from many different cultural histories. Check out Chandra T. Mohanty’s “Under Western Eyes” for more info.

Often, overall, I feel rather damned-if-you-do about how to advocate for global feminisms (plural intended). I’m excited about all the locally-based feminist initiatives around the world, and I’m thrilled that people travel from all over to volunteer for them- but I find myself asking where the global volunteers are for the organizations in my home country. How much of our efforts, I want to know, are still motivated by the belief that We need to bring Them into a “modern” world of equality? No, acid-burning isn’t an issue in America- to my knowledge- but brutally murdering prostitutes is. There’s a tendency for American/Western feminists to speak up on behalf of others, and I’m thinking that needs to change. We need to speak with others instead.

I like the liberation I’ve found in being able to openly, freely, and unashamedly discuss sex, bodies, and behaviours because I can use that relentlessly to open peoples’ eyes to the reality that sex-based violence is a problem. I can use that relentlessly to keep (my) people safe. But what can I- what can we, global Go Girls- do to be allies instead of imperialists? What are the balances we strike to achieve this?

For the Love of the Job