So often when you are speaking with friends who are away travelling or when you yourself are in faraway lands you are more than likely to at once hear/think personally, “I’m having the best time ever, but I wish I could just go home for a week to catch up with my friends and family and then come back out travelling.” This is a great luxury many people dream of but sadly one that is rarely a possibility.

Due to visa reasons/obligations I had to book a flight over to England in order to re-enter Canada again without wasting my flight and therefore I was super lucky in getting to quickly pop back over the Atlantic to see friends and family again after four months.

Needing to book a return flight when I had initially flown here it meant that my intended full flights were over a year long and therefore invalid — which meant that unless I came home for the summer it would be a wasted leg of a journey. I decided two weeks would be perfect. I could split my time between between friends in London and a week in Germany with my parents whilst not feeling like I was away from Canada too long for it to be too hard to have to leave England and all my friends and family behind once again.

Of course I was wrong…It’s always hard to say goodbye, and though I knew that this stint of my year in Canada would be twice as long as I have already had here so far, I also knew what I was heading back to and would be able to slip back into my new ‘regular’ life I have been building in Canada.
But one of the things you always think/hope while you’re away travelling is that nothing has changed back home. Whether you are away for a couple of months or two years, essentially, when you return home you realise things haven’t changed and that life has continued normally on without you! However, it’s often not the things that are ‘changing’ that you feel you are missing out on so much as the small things from week to week. The girly meetups, who’s dating who, people’s new jobs and houses, etc. While these are ‘small’ things that are happening constantly, it can be overwhelming to hear them all at once when you return. While you are away building your life, so much is is happening at home…and yet in the long run, none of it really matters. You can spend as little as a weekend with close friends and be brought up to date with all their news and at the same time feel like you were never away. Emails, Skype and Facebook have made keeping in contact with people at home so easy with free calls, photo-sharing etc. 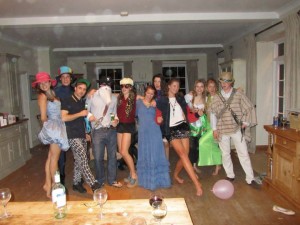 With friends in 'fancy dress'

As I said, splitting my time between friends and family for two weeks worked perfectly. Spending one week in England catching up with friends and getting my fix of Curry, English cider and dressing up in fancy dress (as only the English can do so well) and a week in Germany with my parents left me sad to leave home. But sitting on the plane and flying over the Atlantic, watching the digital map moving the little plane closer to Canada reminded me once again how lucky I am to get to spend this year working in Canada…The experiences gained, friends and personal discoveries made and sense of achievement is too great to give up right now. Maybe by the end I’ll be ready to settle down in a ‘real’ job in England finally, but for now I just have to keep remembering and appreciating that I’m one of the luckiest!