It was the end of a long day. I’d spent several hours bouncing around in the back of a van as we drove through rural Côte d’Ivoire. We’d spent the day in meetings with community leaders in preparation for a “day of solidarity” to take place that weekend celebrating the achievements of that community in mediating land conflict. After our last meeting my co-workers and I went out to get dinner. As usual, I was the only woman in the group, and one of only a few women in the bar. I considered begging off with (real) claims of fatigue, but I also hadn’t eaten since that morning, and braised fish and a beer sounded too good to pass up.

Several hours later, my fish still hadn’t arrived, and I was feeling the effects of two beers on an empty stomach. When the fish arrived I was decidedly underwhelmed by its size. I tried to make up for what I was missing in protein in extra handfuls of rice, but that turns out to not be so substantive. I was hungry and cranky, and I figured it was time to go. I got up to leave and my co-workers gave me the usual, “You crazy American woman, like hell we’re letting you take a taxi home alone,” look.

One of their cell phones rang. It was a friend of our NGO inviting us to continue the party across town. “I’m really tired,” I insisted, and they dropped me off at our hotel. By all accounts, it was a dump: paper thin walls, mysterious stains on the walls, sheets that smelled like they hadn’t been washed since it opened. We were only there because Save the Children was having a conference in this ordinarily sleepy town and all the better hotels were taken up.

Right as I’d entered the lobby, the power went out. I waited for a minute hoping for the reassuring hum of a generator, but no luck. I took a step, tripped, cursed, and felt my way to my room. I used my cell phone as a flashlight, shining it like Nancy Drew in my closets and under my bed, just in case. Then I sprayed myself with Off, pulled my hoody over my head, and tried to convince myself I was imagining the feeling of bugs crawling. I kept thinking I heard sounds on the poorly-locked balcony off my room.

It occurred to me that everyone I knew in this country was off drinking at an unknown location. I couldn’t escape it: I was scared. So I called my mom. For once, the connection was good. “Hey,” I said, trying to make my voice sound casual. “You’ll never believe where I am…” I talked with her until I couldn’t justify the charges anymore and tried to fall asleep again. In the morning, I stumbled down into the hotel lobby to meet up with the rest of the team. I sat down on a couch to wait.

“Excuse me,” said a soldier who had been smoking in a corner when I came in. Thinking he was trying to hit on me, I rolled my eyes and looked down. Then he picked up his AK-47 I somehow hadn’t noticed lying down on the floor next to me. Later that day, as we were setting up for the day of solidarity three truck loads of UN peacekeeping forces rolled up. This turned out to be entirely unnecessary, and they spent the afternoon watching interactive theater.

This little anecdote is pretty typical of my experiences this summer. Making the decision to go to Cote d’Ivoire alone was stretching my comfort zone. Then the organization told me I’d be stationed in a rural town instead of embassy-accessible Abidjan. Then they told me I’d be travelling a bunch – to the Liberian border, into territory still under rebel control.

I’d like to say I smiled at each piece of news and relished the thought of a fresh challenge. But that would be a lie. I’ve been scared a bunch this trip. I’ve stayed up late reading travel advisory warnings and worrying about every worst case scenario. Then I talked with a former (male) intern via Skype about my concerns and he laid it out for me: if I’m going to do this job, I can either drive myself crazy reading third hand sources online or I can trust the people I’m with.

Although it hasn’t been easy, I’ve made the decision to trust my co-workers. And so far, so good. I’m starting to realize that my prior conceptions of what is safe and what is not safe are just fundamentally not suited for my current environment. For example: guns are so understated here, security personnel carry them openly. There are probably more of them around me when I’m in major cities in the U.S. I’ve definitely heard more gun shots at home than I have here. Another thing I hadn’t anticipated was that my blatant not-from-around-here-ness would attract so much positive attention. This is the third post-conflict zone I’ve travelled through, and I’m becoming convinced that these are some of the most foreinger-friendly places to visit. It’s like people are so aware of the bad rep others have of their homes they’re anxious to go out of their way to make you feel at home. Whenever we drive by a UN encampment, I find myself wondering if the yards of barbed wire and heavily armed guards are necessary. I know that there was a horrible conflict here, I know there continues to be conflict here, but on a gut level, I find it impossible to reconcile with my experiences. My heart (or whatever) just can’t comprehend it. 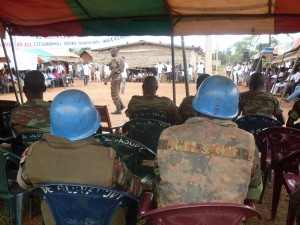 Traveling helps us learn about ourselves and our home countries, as much as ...