Empanadas are not generally associated with death. However, on my way to the grocery store to buy discos para empanadas I found out that a family member (whose relation is through years of proximity rather than marriage or blood)had passed away earlier that day after a long period of failing health.  While I was in my kitchen arranging the circles of empanada dough to defrost and contemplating the irony of my eyes watering from chopping a white onion, I texted a friend of mine about what food we should bring to a potluck on Friday (harkening back to last month, I suggested kale), and he responded that he’d write back to me tomorrow, he was at a wake.

Really though, normally empanadas are not linked with death.  A skype call from Spain last week got me thinking about empanadas.  Although they are a new world treat, I had a spectacular empanada experience in Valencia.

This is a photo of what happens when you leave Madrid to spend only one night in Valencia during the festival of las fallas. You wind up befriending the greatest hosts with the most fantastic friends in the city and then stay an additional day every time you consider catching a bus back to Madrid (cycle repeats for three days).  On a last minute whim, on a Thursday evening, I packed a bag with the bare essentials- my Spanish I.D., my Caja Madrid bank card, my toothbrush, etc., and I met my friend Zsofia at the bus station.  There were still tickets to Valencia available, so we purchased and boarded.  The bus arrived in Valencia very late that night/very early the next morning on a street lined with fruited orange trees. Zsofia and I took in the historic district where winding streets were full of people, plazas, and floats built for the festival. We went dancing until the club closed and the sun was shining.  Then we caught a city bus to the beach and snagged more rest on the sand before wandering the beautiful city of Valencia the next day.

That evening we joined a Couchsurfing host for the last night of las fallas. The float built for las fallas near his house was set afire, in accordance with the protocol of the la cremà, the final celebration of las fallas. The plastic insulator of the power lines above was melting and dripping from the wire, but no one was too concerned. My traveling pal Zsofia, our new gracious host, and his friends all got along famously, and we had a swell time at a quiet bar (calm since the rest of the city was ready to retire after a week of parties every night).  After being set up with twin sleeping mats, expertly made up with sheets and pillows, Zsofia and I slept sweetly in our new Valencian friend’s apartment.  The next day, Capitan Mani and nutella on toast graced the breakfast table, and our buddies offered to walk with us to the bus station, since it was such a gorgeous day and we could stop at the museum en route. We took our sweet time, stopping to hang out a park that housed a large cage full of tiny birds.  By the time we were ready to leave the park, hunger filled our stomachs. Fortunately, our host had a knack of knowing where to procure the closest and most delicious baked goods at all times.  So we followed his lead to an Ecuadorian bakery whose special deal was an empanada + a beer.  We each bought an empanada and a can of beer, occupied the closest bench and picnicked together. This convergence of new friends, fresh air, and spontaneity made that chicken empanada and beer a delightful experience.

Time for a moderately exhaustive empanada review.  The most fantastic empanadas in Albany, New York are at a farmer’s market, where my parents sold honey for a local beekeeper each weekend this past summer. Maria was there every Saturday selling home made Peruvian food, and her chicken empanadas are little fried crescents of heaven on earth.  In Chicago, my favorite empanadas are from the Costa Rican restaurant Irazú. Irazú is a very popular spot where an attractive crowd is always dining in and plenty of bikes are locked up on the sidewalk out front. This place with a patio has huge flaky empanadas which are filled generously with cheese.  An equally popular restaurant in Chicago, 90 Miles Cuban Cafe, also has fantastic empanadas.  Those filled with guava and cheese are choice.  There’s also a little Mexican bakery with very loud bells on the door where I’ve been given a business card to call in my empanada order ahead of time and enjoy showing up just as my freshly fried empanadas are placed piping hot into a paper bag that’s soon shiny and spotted with grease. On travels, I’ve had empanadas at a vegetarian restaurant in Chile, and I’m craving that glass of soymilk right now.

This week I fried up a batch of empanadas at home.  I bought a package of frozen empanada dough, let those defrost, while I fried a white onion and grated quesadilla cheese, a mild white cheese good for melting.  Here’s a great recipe for ingredient guidance. I placed a small amount of cheese and onions in the middle of the disc, folded it in half, and closed the edges with a fork.   Indenting the outside edge of the empanada with the backside of a fork was the magical finishing touch, the dainty lines giving it a look of authenticity, like a pie crust made by a grandma two hundred years ago or out on the prairie.  I’d been heating up vegetable oil in a deep sauce pan and placed four empanadas at a time into the oil, turned them when golden brown, and after they were all cooked, I fried up some plantains for good measure.  I ate my empanada in the sun on the roof patio, with a glass of beer. 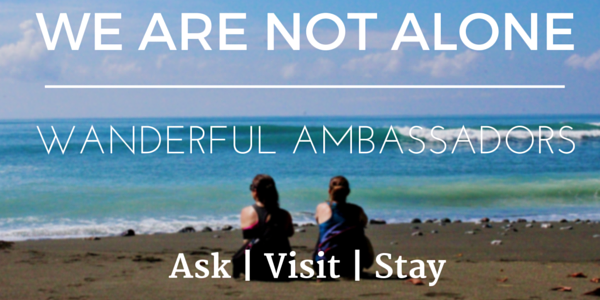 Couchsurfing in Miami to Papa a la Huancaina