Just having finished the book I Am Nujood, Age 10 and Divorced & a recent National Geographic article on child brides (Too Young to Wed, June 2011), I feel compelled to explore the ramifications both within the countries perpetuating child marriage, as well as take a closer look at our own practices here in the United States of ‘growing up’ our girls.

In over 20 countries around the world from Afghanistan to Yemen, girls, often considered property, are married off without their consent at the excruciatingly young ages of 8,9,10 years old to men frequently decades older. According to the International Center for Research on Women, 25,000 girls are estimated to marry every day. That is a staggering statistic. The projection is that 100 million girls will be married off in the next decade. This practice not only hurts the girls themselves, but hampers the whole country’s development by keeping half of the population uneducated and focused on the hearth and home (included is the religiously-justified marriage of young girls in the US and Canada by the likes of Warren Jeffs).

Nujood, now 14, is an incredibly brave young woman. Married to a man three times her age, he raped and beat her every day. This is when, she said, she learned the definition of cruelty. Her escape is one of the most heroic acts I’ve heard of and her courage earned her the first divorce ever in the country of Yemen for a child bride. She has set an example to other girls married off in the same fashion; so far two more girls, ages 9 and 12, have successfully sought divorces from men that deprived them of unrecoverable innocence.

As with so many acts of VAW, poverty, custom, and lack of education are pillars upholding the convention of child brides. Both tradition and culture justify this patriarchal and soul-robbing practice, but marrying child brides also holds monetary value. Young girls are used to pay back loans, right family wrongs, preserve family honor, and bring in cash or commodity that carries economic benefit. As child marriage is receiving more attention, governments are slowly changing laws to accommodate a more moderate version of marital ‘readiness.’ Indeed, Nujood’s case influenced her own government’s take on marriage, moving the official age to 17 for both girls and boys in 2009. NGO’s and women’s organizations are working in local capacities to identify other ways to make ends meet and keep girls in school longer, thereby postponing marriage.

While my rancour is initially directed to the practice of marrying off young girls, I reserve a good portion of it for messages, often seen as benign, aimed at girls in the US. The show Toddlers and Tiaras reveals to anyone with cable that we continue to value girls, toddlers in fact, for their looks and their entertainment value. These little girls are dressed up in suggestive outfits, wear make-up, sport painted nails, fake eyelashes, spray tans and incredible ‘up’ dos. It is the essence of making tiny girls look and act grown up, channelling them into the stereotypes women’s rights activists have been working so long to redefine.

This show highlights a struggle (one of many) in the US: perpetuation of gender stereotyping at an age when girls should be able to express interest in many other activities beyond those traditionally “feminine”. An unfortunate consequence, Toddlers and Tiaras provides an example of yet another type of pageant for girls to follow, focusing on shallow hallmarks of traditional femininity. Unremarkably, it appears as if the mothers of these little girls are the ones most eager to perpetuate the gender stereotype that girls should be pretty and perform for others. While incomparable to the practice of child brides, this show lauds a perverse form of sexism for entertainment.

Girls in the US are pummeled by mainstream media to grow up quickly. From Disney films that embody gender stereotypes and roles (think Beauty and the Beast), to the shows Bad Girls and Real Housewives, which maintain that women are bitchy, self-absorbed, back-stabbing, one-uppers, girls need to purposefully seek out role models who profess a range of qualities, intelligence and talents apart from what is routinely offered. I hear from friends and family who have girls of Nijood’s age express with frustration that “they are 10 going on 18,” implying that they already are reflecting mainstream needs for the beauty and glam of mainstream women. Our media culture, constructed in bulk by men (men own all the media conglomerations), is a key factor for girls wanting to pursue womanhood as narrowly defined by sexism in order to feel valued.

And begs a bigger conversation around culture and women’s and girls’ rights. A couple of suggested websites to visit are: Gender Across Borders and Miss Representation. The latter, a documentary everyone should see, is coming to SIFF at Seattle at the end of the month. 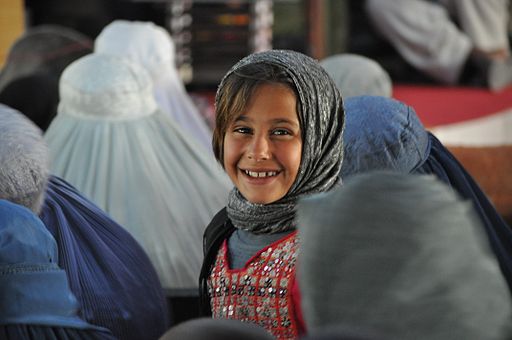