I had shown up on a trapped-between-winter-and-spring Colorado day: warm temperatures, snow still on the ground, with the promise of a snow shower.

I had signed up to take a never-even-stood-up-on-skis-before ski lesson at Monarch Mountain. Growing up in the flat-lands of suburban North Carolina left me without the mountains, or the snow, for any skiing. And my parents certainly weren’t up for ski vacations to places like Vail. Unfortunately for me, it turned out that learning to ski in your late-20’s is akin to death-defying feats of bravery.

As we picked up our equipment, got fitted, learned about the equipment, I noticed some young children. Surely, these 2 and 3 year-olds weren’t in our lesson? Our instructor, a cheerful guy who claimed he just liked “hanging out on the slopes”, which I think was his way of saying that he didn’t mind hanging out with skiing newbies, told us that the kids had their own instructor. I breathed a sigh of relief – at least I wouldn’t wipe out small children.

We started off our lesson slowly: inching up a hill side to ski down and learning how to stop. In retrospect, I am fairly sure the ground was essentially flat, but on the skis, it felt like I was about to jump off the side of the mountain. Have I mentioned my natural inclinations at clumsiness?

Meanwhile, the 2 and 3 year olds took to the bunny slopes like old pros: they were zooming around, riding between their instructor’s legs, screaming happily.

I managed to stay fairly upright, so our instructor suggested riding the chair lift and doing the “easiest of the runs!” It was optimistically labeled “green” and “beginner!” on the Monarch Mountain map, though that did little to help my unease.

I waited my turn in line and marveled at the speed of the chair lift – surely it was broken? It was traveling at least 20 miles per hour! When it was my turn the kid manning the station (he looked like he had been skiing since the age of 3), yelled, “get up to the line!” and I awkwardly attempted to beat the chair as it swung wildly around. The kid had to slow the lift down for me as I barely made it to the line before the chair shot out from under me.

Now that I was on, the next order of business was to safely exit. No one else seemed worried, but I knew that this high speed chair lift had not done its worst to me.

I watched intently as the people in front of me dropped gracefully down when their chairs moved past the off-loading zone, despite the fact that the lift was still operating at an alarming speed. I tried to give the guy in the booth a terrified look so that he would consider slowing the whole thing down for me, but no luck.

I tried to remember what the instructor had said: “put your skis down and lean forward, move away from the landing area.” Instead, I put my skis down, leaned backwards then sideways, lost my skis, and considered riding this contraption back down the mountain.

The guy in the booth yelled something about “lean forward!” But I didn’t really hear him: I had the sense that I had just survived a terrible injustice. Who almost dies getting off a chair lift for the beginner run?!

The run down the beginner slope wasn’t nearly as scaring as the chair lift incident, in fact it almost went very, very well. I managed to avoid wiping out a young girl and her dad, nearly crashed into a patch of trees, and generally shuffled down the mountain. All pretty textbook perfect, I felt. 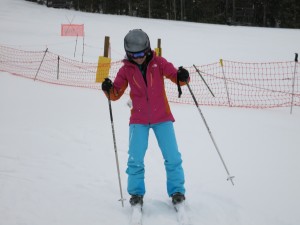 Luckily, there is no photographic record of the beginner run. This is on the bunny slope!

When I arrived at the bottom of the mountain, I was pretty pleased that I had lived – as had everyone else I passed – and it seemed like the perfect time to call it a day. But the instructor wouldn’t hear of it: we were going up again.

I’d like to say that I swallowed my fears and gracefully managed the chair lift and the ski run, and that the bored kid at the bottom said, “good job!”. But, I’m a klutz, so the second run went about the same as the first.

But the good news is that if I can survive death-defying feats of skiing – everyone else in this world has pretty much nothing to worry about when they head out for the ski slopes.

And maybe next time… I’ll be just a little bit more graceful.

An Introvert Abroad: The Lessons of a Root Canal in Bangkok