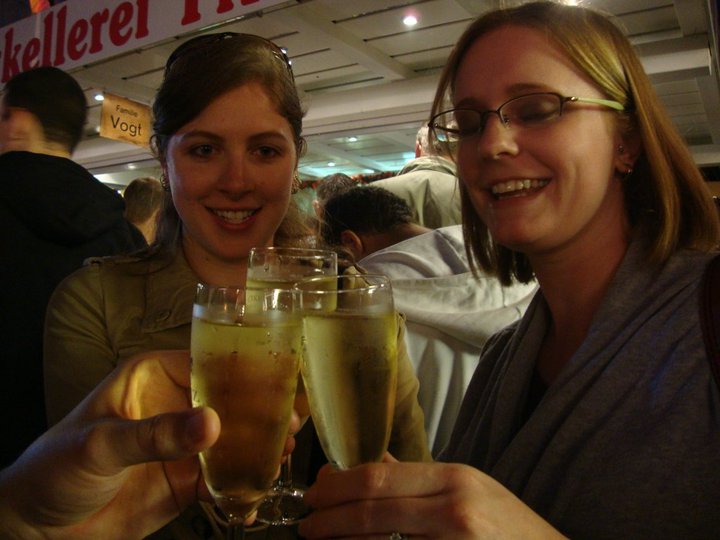 Emma (on right) and I cheer with our special festival wine glasses.

One of the best things about living in Germany, thus far, has been the sheer volume of festivals happening around town. The joke amongst the Americans in the area is that it’s Sunday, or Thursday, or summer, or afternoon, and therefore there needs to be an excuse to hang around and drink beer and wine- thus, we say, runs the German logic. But to a certain extent it’s been true here. There are festivals that feature games, or rides, or handicrafts. Some celebrate special events, like the world-famous Oktoberfest. Others, like the beer tent at the feuerhaus in our town, seem to feature much less.

Last weekend, Nick and I decided to pay a visit to one of Germany’s larger and better-known festivals: the Bad Durkeim Wurstfest, an annual gathering to celebrate wurst and wine about an hour away from where we live. The festival is large enough to have earned the title of the world’s largest wine festival, and it’s easy to see why: when you first arrive there, the scene is dominated by giant carnival rides and an empty wine barrel that’s said to be able to hold about 1.7 million litres of wine. Oh, and the crowds. We opted to take the train in, since the S-Bahn is cheap and easy to navigate, and though we had no idea where in the city the festival was being held, it was sufficient to follow the river of people through the streets until we arrived there.

Large German festivals tend to offer the same three basic categories of things to do: shop, eat, and go on rides. At the Wurstfest, this held true, except for the food options. Instead of the usual German carnival food- schnitzel on rolls, potato cakes with garlic sauce, and tiny wursts- there were metre-long wursts on tiny hot dog buns, wide varieties of pork dishes, and numerous options for food cooked (and consumed with) wine. We opted to try dampfnudeln mit weinsoße, or dumplings with wine sauce, which turned out to be steamed lumps of pretzel dough with cups of white wine and cream on the side. To eat, simply dunk chunks of your dumpling into the sauce and then eat, trying not to be surprised at how very strong the wine is. Be prepared, too, for the fact that food and drink prices are elevated to accommodate the fact that they give you real glasses for your wine and real plates for your dumpling- because of this elevation of price, you’re allowed to keep your glasses if you so desire.

One distinction from other festivals, too, were the wine tents. These had loooooong tables laid out in their centres, with small wine booths ringing the edges and a stage set up somewhere on one side. By the time we arrived at the festival that evening, the tables were overflowing with people sitting on the benches and standing next to their plates, but we squeezed into one anyway to listen to live music and see if we could find some wine to taste. Don’t be fooled by the fact that American pop and rock have overwhelmed many of the radio stations in the area- what we heard in the tent was a combination of (what I think of as) traditional German music and modern rock, complete with electric accordion. We were shoved back and forth as the couples all around us, all singing loudly in German, polka’ed in time to the music and their young children danced with each other in circles. It was too loud and crowded for us to stay, but I couldn’t help but think that getting there a few hours earlier would have meant having a seat at one of the tables and getting a better chance to enjoy the concert.

Getting to the festival earlier in the day probably would’ve meant better things for our wine-tasting, too. European attitudes towards alcohol are radically different from American ones, and wine at the festival was sold by the glass, the half-litre, or the bottle. We opted to sample a glass of sparkling wine from a small booth further away from the crowds, in part because it was the only wine-tasting booth we could find at that time of night. It was only 8:30, but we were surrounded by people who had clearly been enjoying the half-litres for several hours. There were plenty of wineries representing themselves in the large tents, but outside most of them had packed up their displays and ceded the attention to the food and game stalls nearby.

Perhaps too part of the reason they’d packed up was the fact that the Bad Durkheim wine fest is a popular attraction for the local American population, which is mostly composed of active duty service members. And the GIs we saw at the festival created an atmosphere that was akin to the worst of a frat party, including prolific vomiting, fistfights, aggression, and so on. Our train ride back at 10:00 was full to the brim with drunken soldiers, who spent the entire ride shouting at the top of their lungs, throwing up, and shoving each other (and, consequently, us). I thought that maybe we’d happened to have bad luck, but it turns out that this is fairly normal for any major alcohol-related festival in Germany.

So the end lesson, I suppose, is get there early. You’ll get a seat in the tents, you’ll get to try the wine, and you won’t get harassed and vomited on during the train ride home. 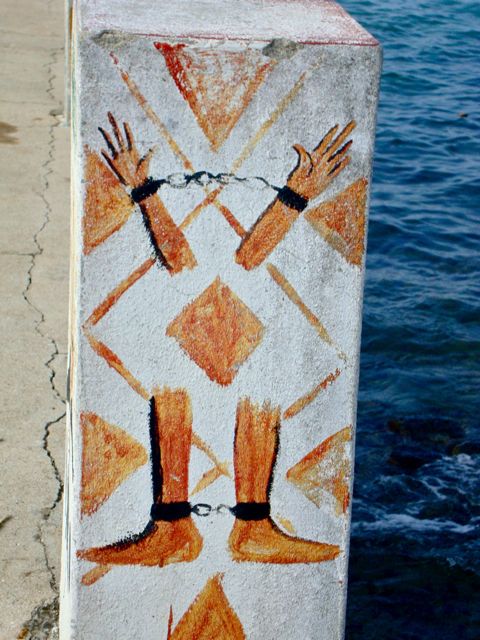 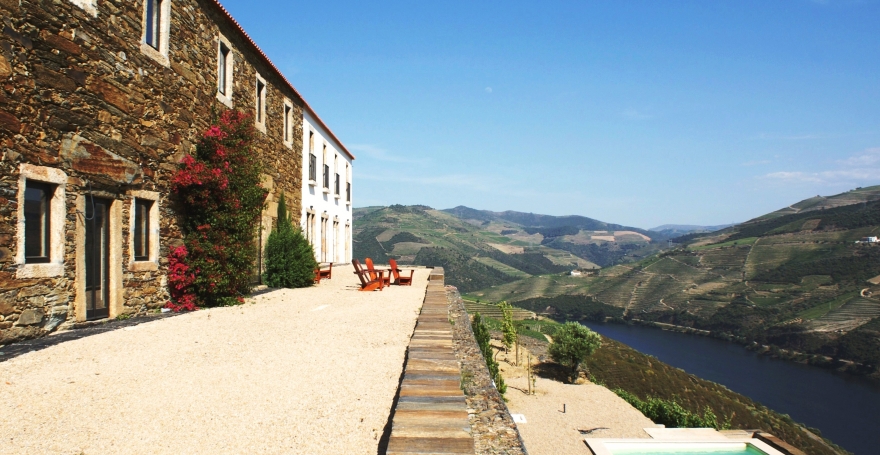 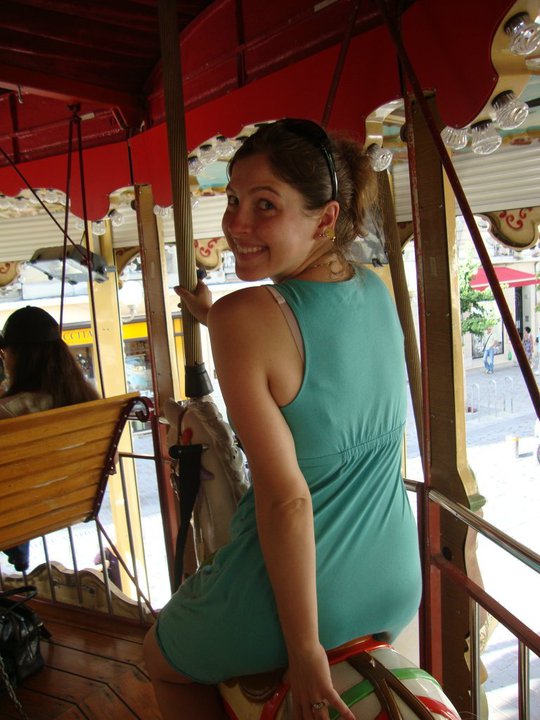 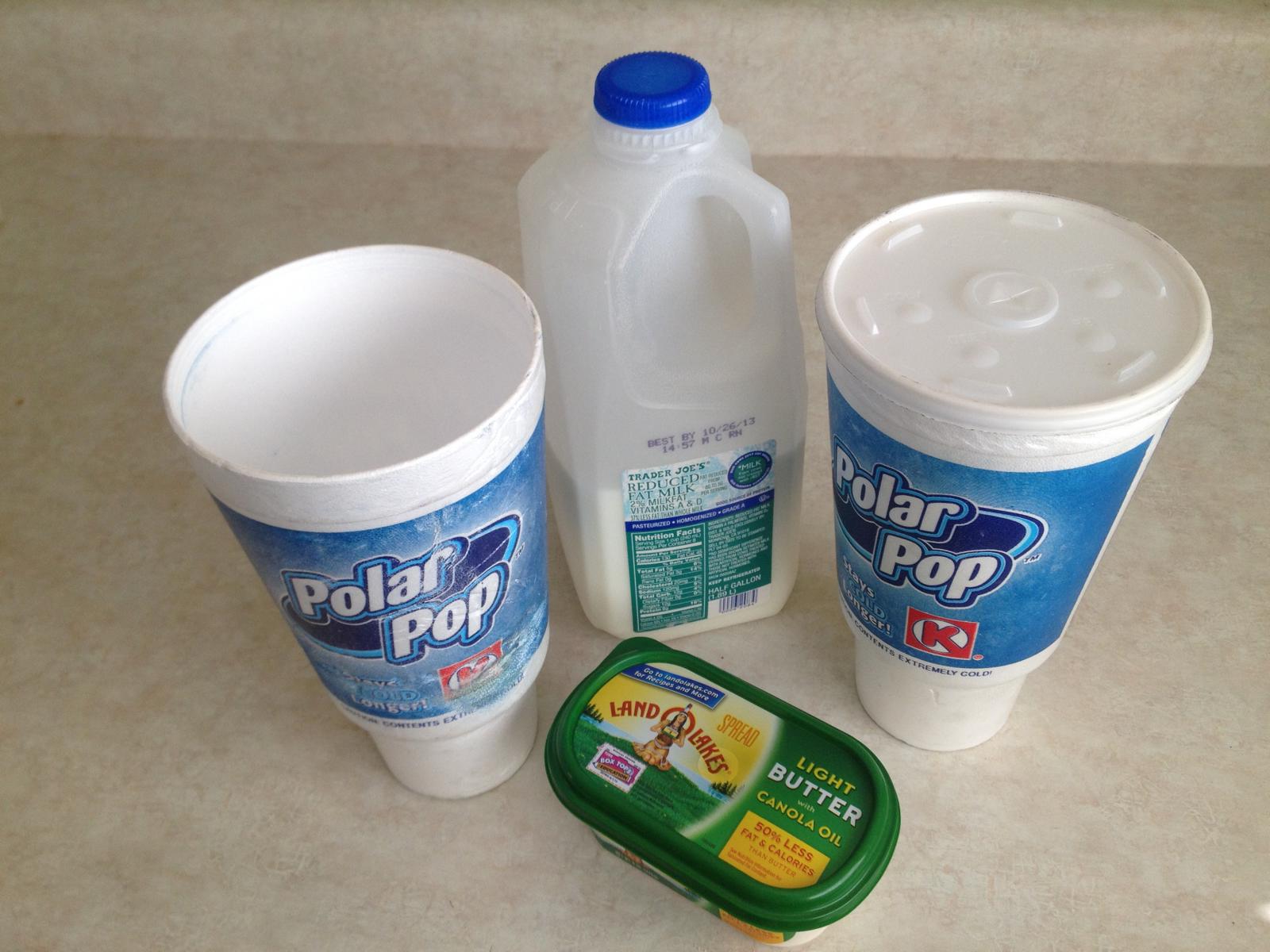