Too often traveling conjures up grandiose scenarios involving interminably long flights, layovers in obscure airports and many dusty hours on a rickety bus.

To be honest, I’m not even sure I’ll ever make it to India. On the one hand the romantic notion of a month-long yoga retreat in some far flung ashram beckons, but on the other I’m way too squeamish to even contemplate negotiating the country’s poverty.

But I digress. My plans to travel abroad someday are not what this particular post is about, quite the contrary in fact. It’s to show you how much I have to enjoy right here on my own doorstep.

Sporty and I live in Gardens, which is part of Cape Town’s city bowl. Our 12th floor apartment might not have a balcony, but with a backyard as spectacular as ours that doesn’t really matter.

Ang with Table Mountain behind her

Sporty and I enjoy the odd jaunt up to the top every now and then. Depending on your level of fitness and route of choice it can take anywhere between 30 minutes to a few hours to the top.

Last Sunday morning we set a challenge for ourselves. The plan was to summit our ‘backyard’ from a new starting point: our apartment.

We figured it would take us about 90 minutes to the base of Platteklip Gorge and another 90 to the top. After which we’d enjoy a leisurely coffee, head back down in the cable car and jaunt home in time for lunch.

Figuring we knew the area well we set off without consulting a map. Up was all we had to keep in mind — how hard could that be, right?

Up we went. Chatting quietly, breathing in the Jasmine and stopping to say hi to the occasional cat. We eventually arrived at a road I recognized from one of my runs.

“Let’s go down here,” I suggested to Sporty, “the road is a dead end, but there’s a trail leading onto another road. We can probably find our way up from there.”

Ever the adventurous spirit, Sporty agreed. On reaching the trail we were faced with two choices: We could head down onto the road I’d taken on my run or up past the quarry.

Neither of us wanted to head down, which would have meant moving away from our goal, and besides, up looked way more interesting.

We stopped at the quarry gate and peered in, nothing but rocks. Spotting the makings of a path we scrambled upwards, stopping at the top to peer down into the quarry.

“There are people down there,” whispered Sporty, stepping back quickly lest they noticed her.

I took a look and sure enough, down below were two guys in the throws of packing up their camping site. We dubbed them the last remaining survivors of the lesser-spotted Glencoe quarry tribe, burst into a fit of childish giggles and raced off.

Sporty at the top of Glencoe Quarry

The path petered out at one point, but then we caught sight of it again and pushed on. A short while later we experienced one of those rare ‘puzzle’ moments, where two completely separate areas meld together to become one.

Before we knew it we were standing in the parking lot on Kloof Nek, the intersection that leads, depending on the direction you take, to Camps Bay, Lions Heads and Signal Hill or Table Mountain.

It’s a stiff uphill climb from the parking lot to the lower cable station, but easily doable in 15-20 minutes if you hoof it. We chugged back some water and set off.

All told it took us an hour and a half to reach the cable station, which when you take into account our unplanned detour via the quarry, wasn’t half bad.

Sporty and Ang with the cable station in the background

Unfortunately our adventure came to a rather abrupt end at that point when I experienced a rather inconvenient blood sugar dip. While by no means life threatening, having one’s blood sugar levels hovering around one’s ankles is not a good condition to be in when preparing for a jaunt up Table Mountain.

We were disappointed that we didn’t make it to the top, especially as it meant missing out on our early morning ‘coffee with a view’, but we consoled ourselves with the knowledge that at least we’d spotted the last two remaining Glencoe quarry tribe members.

Besides, it’s our backyard; we can head out again whenever the mood takes us.

With so many places to explore in Cape Town, we want to know what interests YOU! Leave a comment and let us know where you’d like Sporty and me to travel to next, and we’ll venture out there for my next post! 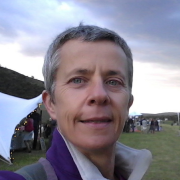