The use of plastic worldwide is rising year after year.

In fact, over the last decade, we’ve produced more plastic than in the preceding century. Enough is thrown away annually to circle the Earth four times.

Half of what we toss is used just once before it’s discarded. We only recover 5% of the plastic that we go through. Fifty percent of all trash is chucked into a landfill, some is recycled, and the rest washes out into the sea.

Plastic makes up 90% of the trash that’s currently floating around world’s oceans. It accounts for the deaths of around one million seabirds and 100,000 marine mammals each year. The current projection is that there will be more plastic than fish in the sea by 2050.

Not only is plastic bad for the planet, but it’s also terrible for our health. Ninety-three percent of Americans aged six or older have tested positive for the chemical BPA, which is found in plastic.

Exposure to BPA can lead to problems with neurological and reproductive development, and has also been linked to a rise in breast and prostate cancer rates. This knowledge has led to an increase in products made without BPA, although research suggests that these products may not be any better for us.

In summary, plastic is harmful to us. And it’s having a shocking effect on the planet.

So, why continue to use it?

Why I Decided to Ditch Plastic

I was born and raised in Australia, a country that is notorious for its attitude towards rubbish. There are constant campaigns and numerous laws against littering, with high fines handed out to those who cross the line. Australian beaches are some of the most beautiful in the world and the country’s citizens work hard to keep them that way.

Of course, I took this all for granted. It was all that I knew.

In 2014, I moved overseas and started traveling on a regular basis. My first stop was the Middle East, where I spent three months living and working in Doha, the capital of Qatar.

Doha’s water is undrinkable and most expats get by on bottle after bottle of imported spring water. I would fill up my reusable stainless steel bottle via the filtered tap at work, but still had to resort to drinking the spring water in my hotel. The waste seemed so unnecessary and I wish I’d been more prepared for it.

I’d go to the beach and find myself swimming in water that was rife with plastic bottles, bags, cans, and other trash. It was no different in Europe, where people would smoke on the beach and leave their cigarette butts and other rubbish in the sand.

After leaving Doha, I moved to the United Kingdom. I worked in London, but left the city to go exploring whenever I got the chance.

The more I traveled, the more trash started to bother me. I’d line up my camera to take a photo, framing out rubbish in the way. I felt guilty drinking bottled water. I wished there was something I could do.

Then, I realized there was.

I decided that I would try to cut as much plastic as possible out of my everyday life — particularly when traveling.

How Difficult is it to Travel Without Plastic?

I made a pledge to myself at the start of 2016 to completely eliminate plastic from my life by the year’s end.

It’s been challenging, particularly as I’m living in a foreign city. Yet, I’m quite pleased with the small victories I’ve had so far.

The biggest challenge has been food. So much of what we eat is pre-wrapped in plastic, often unnecessarily. My local supermarket sells both bananas and avocados in plastic packaging. This baffles me, as nature has gone out of its way to pre-package these fruits for us!

I travel with my own spork, bags, water bottle, and containers in order to combat the problem of packaging. Although I can’t avoid it every time I want to eat, I’m producing way less waste than I was before.

What Can You Do to Help?

The problem that I had (and you may have too) is figuring out where to start.

My suggestion is to ease into it. I started by breaking down certain areas of my life and looking at how I could eliminate plastic from them. When I’d exhausted all possibilities, I’d then move onto the next area.

Here are some suggestions for getting started.

Stop Rushing and Take Your Time

Disposable items are the product of billions of lives lived in the fast lane. We’re constantly on the go, rushing from home to work to the gym to home again — or from one country to the next.

So, I ask you the same question I often ask myself: What’s the hurry?

If you’re in desperate need of the boost of energy that only coffee can provide, go to the nearest café. Sit down and order a cappuccino. Savor the moment to indulge in one of the greatest pleasures of traveling – people watching. There’s no reason to take it to go.

Time is precious. Make the most of it by appreciating each moment, rather than letting them all pass us by.

Sometimes rushing around is unavoidable, particularly when traveling. To get around using disposable plastic items, you need to prepare for all circumstances. This is best done by having your own reusable items on hand.

When I travel now, I always make sure I have the following items on me:

These take up little room in my bag and have saved me from using countless disposable plastic items while on the road.

Swap to a Reusable Menstrual Cup

As a cis woman, one of the first hurdles I had to overcome on this particular travel challenge was my period. I was generating so much waste each month in the form of tampons and pads (not to mention the expenses incurred in purchasing what I needed to get through each cycle).

I found the answer in the form of Lunette, which I’ve been using for well over a year now (though there are many other menstrual cup options available). I pop it in when Aunt Flow comes to town, and empty it every 12 hours or so. My periods have gone from being a monthly hassle to barely noticeable since I started using it.

My Lunette cup has been a godsend while traveling. It takes up next to no room in my toiletries bag, and I don’t have to run around a foreign city looking for pads.

The financial benefits are fun too – I’ve saved myself around $12 AUD a month since I started using it. This is money that now goes towards other more important things, like food.

Don’t Be Afraid to Speak Up

One of the challenges I faced when I ditched plastic was having the confidence to make my views heard.

I’ll admit that I was scared of judgement and ridicule every time I requested a drink with no straw. Asking for my food in a Tupperware container made me go red in the face.

Yet, the reception has largely been positive. Although people have sometimes forgotten or ignored my requests, most are happy to oblige. Some are curious and ask questions. I even had one fellow say, “More should be doing what you’re doing!” It was such a heartwarming and positive thing to hear.

I’ve experienced the best success by preempting a situation. If I’m ordering a drink in a bar, I ask the bartender if they put straws in their drinks before even ordering. If they say yes, I ask for a drink without a straw, and then I place my order. This way, it’s at the front of their mind, rather than an afterthought.

Language barriers can sometimes be problematic, but I’ve gotten past this by researching key phrases before I leave. If I’m off to a Spanish-speaking country, I’ll research how to say “hello” and “please” as usual, but I’ll also look up things like, “No straw, thanks.” (In case you’re curious, it’s “No quiero sorbete, gracias.”)

And where words fail, body language steps in. Sometimes I’ve gotten by with simple mimes. Those victories feel particularly satisfying.

The most important lesson I’ve learned from my experiment is to be patient.

You’ve got to remember that you are going against the grain. People world-over are set in the practice of using plastic and other disposable materials in their daily lives.

Requesting a drink without a straw, or refusing plastic cutlery in a restaurant, is an unusual thing to do. People will often move faster than you expect, or forget you made your request in the first place.

I used to get mad whenever this happened to me. Then I realized that that anger was serving no purpose. I’d think instead of all the instances where I’d been successful, and concentrate on them instead. I’d also reflect on how I could do better the next time.

Living a life without plastic is a bit like reinventing the wheel.

For most of us, it’s new territory. It takes confidence, patience, and innovation to see it through. There will be times when you’ll become frustrated with yourself or other people, or you’ll wonder what the point of it even is.

In these moments, I remind myself of why I chose to do this: Out of respect for the planet, for all I currently share it with, and those who will come after me.

The pay off makes it worth it. On that, we can all agree.

How else do you travel sustainably? Share in the comments!

Images of the author, and of the napkin and spork, courtesy of LC Haughey. 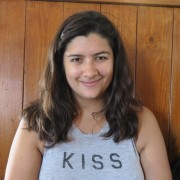 LC Haughey
LC is an Australian expat, living in the United Kingdom. Her hobbies include writing about her attempts to live a greener lifestyle in a big city on her blog Birdgehls and looking longingly at pictures of German Shepherd puppies on the Internet.