Riding a city bus in Barranquilla, Colombia is not quite the same as in the States. In fact, you could say the differences between the two could bowl you over…literally.

Most buses here are run by private companies. They pick their routes and, for the most part, stick to them. However, this is never a sure thing. For these buses, there are also no bus stops. Instead, you must make your way to a street where you’ve learned, from hearsay or experience, a bus generally passes. If your intended bus hasn’t arrived within five to seven minutes, you are probably on the wrong street.

For the sake of this scenario, let’s say that it’s 9:00 on a Sunday night. You’ve just finished a bit of sundry shopping. The streets are too unsafe to walk, and you and the rest of the world need to return home.

When your bus comes screaming by, stick your hand out in a floppy sort of Hitler salute, indicating you’d like to climb on. In hindsight—as well as foresight—this almost always seems a bad decision. However, lacking a car, and distance and/or arroyos (the raging floods that fill the streets when it rains) having forced your hand, onward you go.

When the bus screeches to an obliging halt, you haul yourself up the first few steps and stand wedged at the top, just inside the door. You’re lucky to ascend this far, since you happen to be a small pale girl and the menfolk take your erstwhile place hanging out the side of the bus. As the surrounding men stare ardently, you give over your 1600 mil pesos (about a dollar, US) to the driver, who impetuously holds out his hand even while talking on his cell phone, accelerating down the narrow street, and joking loudly with the person riding shotgun.

Then: hold on. Bus rides here are nothing if not a test of the bus’s brakes—be prepared to speed towards the car, taxi, or pedestrian audacious enough to take up space in the lane ahead, before the bus driver brakes at the last second. The bus driver will then blare his horn multiple times for being so impeded. When this does not magically clear the gridlock, said driver will pull immediately into the opposite lane, cutting off everyone possible, even as oncoming traffic charges forward. 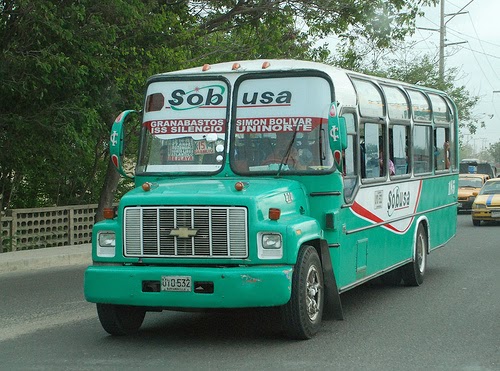 A picture borrowed from another PCV...I call this bus "The Green Monster" for its size and, shall we say, lack of user-friendliness.

It’s a frightening thing, being so close to the front and able to witness these driving feats, but no matter—because soon the bus driver will glance back and see an inch of space has opened in back. Never one to waste the opportunity to pack on more people, he’ll holler for everyone to squeeze in more, and crank you finally through the turnstile.

Now you’ll stand so close to the other people crowding the aisles that your arms slide in mutual sweat in time with the bus’s jerks and stops. As the woman sharing your aisle space bumps her ample self into your back, then reclines and settles in for the ride, it will occur to you that here are more than just traffic-related reasons you may not survive this bus ride. But the gods are good; at least your companions have mostly used deodorant.

A gut-wrenching 45 minutes of stops, starts, turns, accelerations and near-accidents later, you lean over the passengers, peer out the window, and see you’re rapidly approaching your address. Too rapidly. Although just minutes before the streets were so congested you moved only in fits and bursts, suddenly the way ahead has cleared. In the space of time it will take this barreling bus to race four blocks, you need to squeeze through a bus aisle stuffed three people deep.

If you are good at Twister, these skills might come in handy—although moreso if you’ve ever played it in a dark and oscillating setting. Hauling your curse of a grocery bag, you climb over legs, squeeze between flesh, push, pull, yank, levitate…and there it is: the door. You search for the button to push that will let you out of this careening hell—and you see that it’s broken.

Parada! you shout. At the sound of your foreign accent, the entire bus will swivel to stare you down, you who have already pissed off at least ten people by stepping on them or squashing their families in your quest for the door. Gringas, you can see them think.

But, mercifully, the bus shudders to a stop. You lurch off, gaining land-legs slowly as you stumble towards home, breathing in the suddenly sweet-seeming Barranquilla air.

For the moment, you’ve survived. As long as you can figure out how to make it across the street… 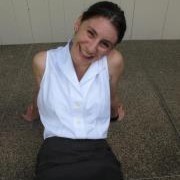