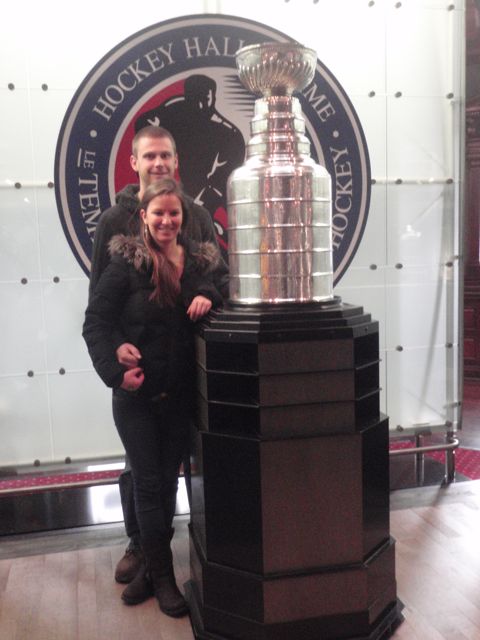 Hockey.  In Canada, hockey is played on ice. Almost every Canadian child will be brought up with the game in what seems to be a lifestyle as opposed to a choice. Each winter ice rinks go up all over cities in parks, backyards and any frozen river. Nets are put in position and skates are brought out of the cupboards to be sharpened once again. Fathers lose their weekends in order to wake up their kids at ungodly hours to drive them to the rinks for games.  The smell of the changing rooms and gear bags (which weigh the same as the tiny being underneath it), the fresh ice and a Tim Horton’s are all conjured up when you ask an older Canadian about their childhood hockey memories.  Once introduced to it young, hockey remains a constant in life. It’s played everywhere; it’s on the television, the radio, newspapers and discussed on buses, in coffee shops, living rooms, bars and at work.  This is Canada’s game, it’s what they do and there’s no escaping it — especially around this time of year.

Sports is one of those unusual things that can totally unite and tear apart countries at the same time. Where you grow up, who your family backs or a particular idol are just a couple of factors in deciding which team to support. People will spend hundreds on jerseys, car stickers, t-shirts, caps and much more just to advertise who they support.

However, there can occasionally be exceptions to allegiance in certain situations. For the first time in about five seasons a Canadian team made it to the ‘final’ in a bid to win The Stanley Cup. Supporters of teams who had long finished hockey for the season began to pick up interest in the game again. The possibility of the Cup being returned to Canada after 13 years in the States was enough to tempt even moderate hockey fans back to the bars for beers and games. Even with temperatures in the 30s (80s), hockey jerseys were brought back out again and beards were grown-both worn with pride.  After eight months, hundreds of games, tears, sweat and injuries, it all came down to 60 minutes more before the true ‘champions’ could be determined. The Vancouver Canucks were to face the Boston Bruins for one last game of the season. Scenes reminiscent of the Olympic hockey final unfolded all over Ottawa and all I seemed to hear about all day was where people were going to be for the game. This wasn’t a night to take lightly.  To cut a long game short, Vancouver lost and alas the Cup was to stay in the States for yet another year.

Now, I’m a follower of many sports-albeit it not a diehard fan of any one in particular, but I have never quite understood the anger that follows from a team’s loss. I went to Paris when England was playing South Africa in the rugby world cup final back in 2007 and was shocked to see the riot police getting into position towards they end of the game when it was clear England was about to lose. I went up to one of the police and asked why they were all there-he looked equally as confused with my question as I was about their presence and simply said, ‘Well England is about to lose-you will riot.’ He was totally wrong. Not a single riot broke out in Paris that night. Unfortunately this was not the case in Vancouver last night. Angry fans took the streets burning shirts, tires and cars, smashing shop windows and looting, attacking policemen and fellow fans. After such euphoria leading up the game it’s such a shame it had to end up this way. But I suppose that’s what happens when you are brought up with such a passion for something, you will naturally dislike it when something you want so badly and have been waiting months–years even–for is brought so close only to be taken away in 60 minutes.

But Canada will never change and by tomorrow life will be back to normal again for those devastated Vancouver fans. I am by absolutely no means suggesting hockey fever should be tuned down here, like I said, it’s what they live for here!

Why change a perfectly good lifestyle when you love it?! Until October when those ice rinks start cropping up all over the city, people will take to the roads for games of street hockey instead. It’s inescapable!

Driving in the East of the USA