Review On the Go:  Paris, Moi and The Gang: A Memoir… of Sorts

centers around a year author Frances Gendlin spent living in Paris while writing a travel guide about the city. The book is filled with lovable characters, amusing anecdotes and the author’s genuine love for the City of Light. Gendlin’s writing is witty, well-crafted and engaging, and her descriptions of the city and its history, her quirky and enchanting group of friends, and the joys, challenges and oddities of being an American in Paris make this memoir a warm and inviting read. You’ll be as sorry to leave when it’s over as you would be to leave Paris itself. 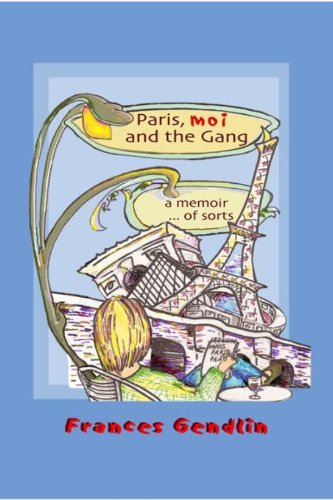 The cover of Frances Gendlin's "Paris, Moi and the Gang."

is, as she says, a memoir “of sorts,” a fictionalized retelling of the year the author spent living in Paris while writing a guidebook about the city (Gendlin has written several books for the Culture Shock! Travel guide series). Her Paris, full of ex-pats who receive invitations to Embassy parties, PDGs of French publishing houses and the occasional dashing, silver-haired restaurateur could have seemed a million miles from my Paris, peopled with a mélange of young internationals and transients, drinking beer instead of Badoit or champagne and spending our late nights in the bars and clubs around Bastille or le Quartier Latin. But (and I think this is a tribute both to Gendlin’s open, humorous writing style and to the kind of city Paris is) I was struck more by the way our lives in Paris were the same than by the myriad ways in which they were different.

Once I’d met Gendlin’s “cast” of friends, I was as happily ensconced in her memoir as I would have been perched on a footstool in a tiny Parisian sitting room, sipping an apero and eating hors d’oeuvre, surrounded by the real people upon which her characters are based. The “gang” of the book’s title include the lovable and avuncular “Oldest Queens in Paris,” Paul and Klaus; fellow-writer and frequent café companion, Caroline; Richard, a wealthy, wine-loving widower; the fount-of-arcane-Parisian-knowledge, Findlay, and his wife Alice; suave French PDG, Jean-Pierre (JP), and his American ex-wife, Sandra. They’re a génial bunch (in both the French and English senses of the word) full of character, charisma and eccentricities. Gendlin conveys this in manner that is both engaging, affectionate,  and happily free of the trite politeness that can prevent a memoirist (even one of a  “sort of” memoir) from registering honestly the times when certain idiosyncrasies (even, or especially, those belonging to the people we love the most) err on the side of being  annoying, rather than endearing. And Gendlin’s occasional momentsof sarcasm and (more frequent) bouts of impatience make her narrative voice more believable and human, creating for the reader a better companion and a more interesting guide.

In the first words of the opening chapter, Gendlin writes “God knows I’m not the first American to write about falling under the spell of Paris and coming here to live,” and one of the best things about Paris, Moi and The Gang

is that Gendlin wisely views Paris’s much-written-about history as a resource rather than a drawback. As a guidebook writer, reading obsessively must be an occupational hazard, but her memoir makes it clear that for Gendlin, reading (and reading about Paris) is also a pleasure and a passion. The book is strengthened by her breadth of familiarity with the history of the city and the many writers and artists who’ve called it home. Maybe one of the best compliments I can give as to how much I enjoyed Gendlin’s writing and the strength of her prose is to say that though she often quotes the words of writers like Ernest Hemingway and Gertrude Stein, I never found myself wishing I was reading their writing about Paris, rather than hers.

Though she admirably sets herself the goal of saying something new about the city, she doesn’t belabor the point, and so her insights about Paris arrive naturally, simply from the experience of living there. When she writes that “everything in Paris is an event,”  she gracefully articulates one of my favorite things about the city and about living in it. 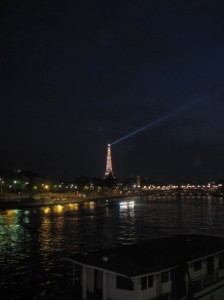 Paris makes you pay attention to the little things in your life. It participates, as more than just a backdrop, in every promenade, every picnic, and every grey or sunny day.

It’s a lovely balance, being an American in Paris, and Gendlin seems to feel the same kind of awe and gratitude I felt, living there.  Obviously, one doesn’t spend one’s whole life in Paris feeling awed before l’Arc de Triomphe. One has to work, and eat, and play (as Gendlin does, with her restaurateur and later a handsome Italian voisin) just as one does anywhere else. It’s just that living in Paris reminds you that life is an experience—one full of beauty, at that—and the city urges you to be open to this experience each and every day.

That’s the spirit of Paris that Gendlin conjures in this charming, funny and warm-hearted memoir. If you’ve visited, lived in or loved Paris—or if you’d just like a taste of life in the City of Light—you’ll love Paris, Moi and The Gang

. But consider this fair warning, for both Gendlin’s book and that weekend trip you’ll plan to take to the la Ville Lumiere once you’ve finished it: once you’re there, it’s likely you’ll find yourself asking, as Gendlin does, “Why would anyone leave Paris?” And like me, you may wind up looking up ticket prices on Orbitz, contemplating international career opportunities, cheering on the rise of the dollar, and wondering to yourself, “Why, indeed.”

After a long career in publishing, as Editor of Sierra magazine and Executive Director of the Association of American University Presses, Frances Gendlin decided to get paid for indulging her love of adventure.  She has written Culture Shock! guides to Rome, Paris, and San Francisco.  After a dozen years of living in Paris, the dollar fell considerably, and she decamped to Puerto Vallarta, Mexico, but with the rise of the dollar, she’s plotting and scheming her triumphant return to Paris. For more information, visit her website at http://frangendlin.com/.