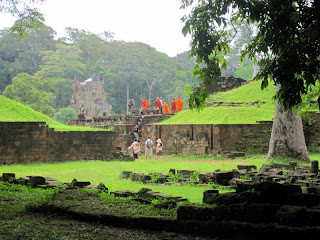 His tiny form flitted past the hole in the stone wall so fast I thought he might be a forest spirit. But then there he was again: sparkling eyes, tiny body in a grubby orange shirt, barefoot… He disappeared again, and I was ten minutes further into the thick jungle path to the next temple when he materialized right beside me. 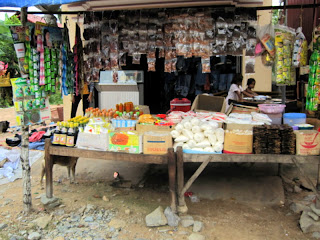 “Hello lady!” he said with a smile. “This used to be the Grand Palace, almost a thousand years ago. See those big and small pools over there?” I looked, seeing glistening water through the sunlit green foliage. “Big pool for woman, small pool for man. You know why?” I didn’t. “One king, many concubines!” 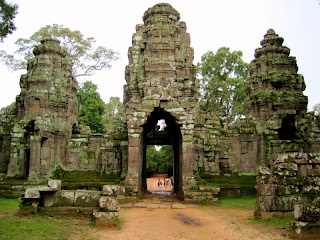 The boy continued his informative chatter by my waist for the next three jungle temples, and to tell the truth I could use the company, as these sites, though extremely famous, were eerily deserted at this time of day. But I suppose I knew the inevitable would come soon enough.
“Do you live here?” I asked, gesturing to the tangled expanse. “Yes, I have no mother and father, so I live with the monks here,” he said. “In the afternoons I go to school and learn Khymer, English and Thai.” Indeed, his English was excellent. 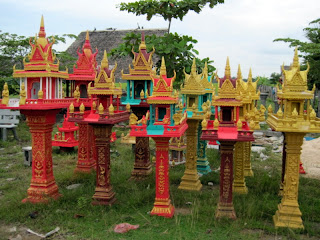 I neared my meeting point with Sopheak, and so I turned to wish the little one well. When he realized I was leaving, his eyes turned suddenly dead. 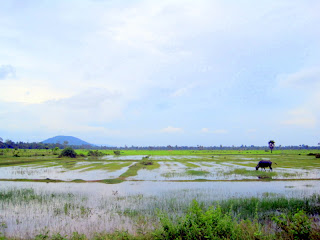 “Give me some money for school,” he said so quietly and robotically that I could barely hear. 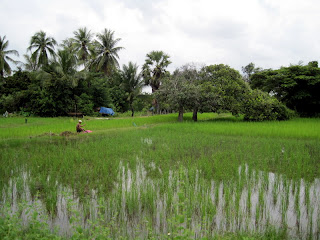 “I’m sorry, but I don’t give anyone money at the temples,” I said truthfully. Much has been written about how young children are being pulled out of school across Cambodia to shill trinkets to tourists, and to beg for money– all of which goes right back in the pockets of the unscrupulous adults. 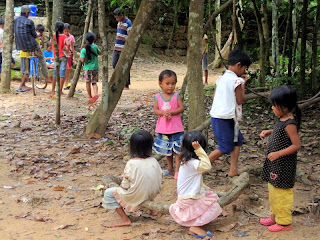 “Give me some money. Just one dollar,” the tiny boy intoned, holding out his hands. The dark jungle framed his body, and the incense from the nearby shrine wafted past us.
“Just a dollar. Give me money,” he began chanting over and over, following me slower and slower until I reached the road. I could still hear his voice as I climbed into the tuk-tuk. By now, ten more children had surrounded the car, holding out scarves, postcards, flutes. 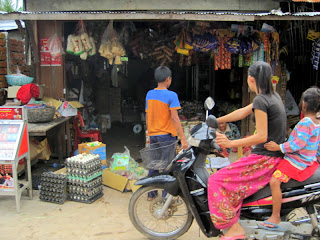 Every visitor who has been to Angkor Wat will remark on the intensity of the selling and begging. The moment your tuk-tuk or motorcycle pulls up, a hoard of young Cambodians will sprint up, screaming any and every combination of the following: “LADY! You come here, lady! Where you from? I give you good price. Scarf? For your mother? Nice cold drink? Batteries for your camera? Guidebook to Angkor Wat? You buy, you buy from me, okay? Maybe come back later, okay?” 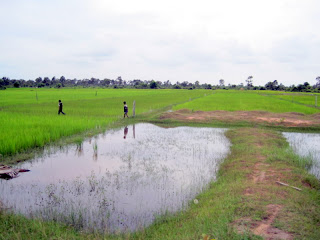 Every visitor has different reactions– all difficult. If you buy from her, are you supporting an unethical adult? If you buy from him, what happens to the forty children behind him that you don’t buy from? The most common and consistent solution is to hold off on giving any money to these children, and rather make a larger donation to a reputable Cambodian organization.
Meeting this little boy, however, I became intensely curious about just who is living in and around Angkor Wat, and where. We know, since it is a working temple with many active shrines, that there are monks here. We also know from the boy that these monks have some orphans in their care. 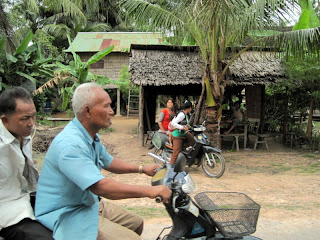 I asked Sopheak, gesturing to the hundreds of rickety vendor stalls along the temple roads, “Do these people also sleep in the temple grounds?” “Oh no,” he replied, “Police don’t allow. They pay off police so they can sell here, maybe five dollar a month. But to live they have a village right outside.”
I nodded. However, as the day wore on, I began to spot small tents and hammocks hidden in the jungle right behind the more obscure temples. “Are you sure people don’t live here?” I asked Sopheak again. “Well,” he said, “Sometimes, yes.”
Imagine arising in your tattered tent, right under the eighth wonder of the world! 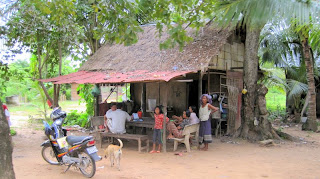 The Angkor Wat complex of temples stretches for miles upon miles, and in between there are villages. Sopheak and I drove nearly an hour straight each way today, and the villages we passed were as beautiful and fascinating as the temples. First, there were the stunningly green rice paddies, shimmering wetly, smattered with water buffalo, rice workers, and tiny children. 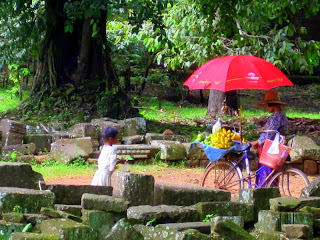 Then there were vendor stalls lining the road. So many stalls! Could they possibly sell more than two items a day with all that competition? While they waited the interminable hours for a customer to stop, the families cuddled together under palm roofs, playing with each others’ hair and cooking smoky food. Slick naked bodies peeked out of the brown rivers we passed, and half-clothed men worked on engines. Whole families crowded onto mopeds and zoomed by us, the fourth child in the pile sometimes waving with glee. 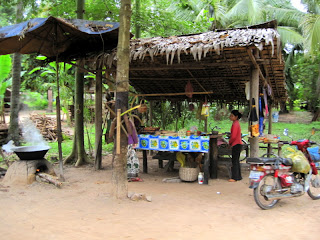 And the mines. Cambodia is one of the most heavily landmined countries in the world, and thus you must never stray off a beaten path. Sure enough, six jungle patches we passed displayed signs: “Landmine field cleared by Japanese Armed Forces”. We saw many group homes for people who had lost limbs in the explosions, signs saying they were funded by German or American organizations. Musical groups formed of amputees grace the paths of many temples. 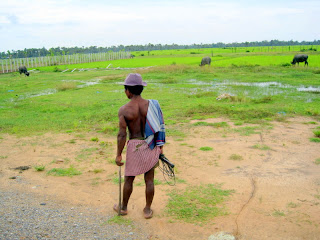 Of course, not all the Cambodians in and around Angkor Wat are there to sell to tourists! Angkor Wat provides free entrance to any Cambodian national, and thus at least ten percent of the awe-struck temple viewers are from the land itself.
Today we passed a small Cambodian family climbing off their moped, laying out a blanket by the Angkor Wat lakeside, and diving into a rollicking picnic lunch. Beautiful!
“Hey honey, where should we take the kids to eat today?”
“How about in front of the biggest temple in the world?”
“Sounds good to me.” 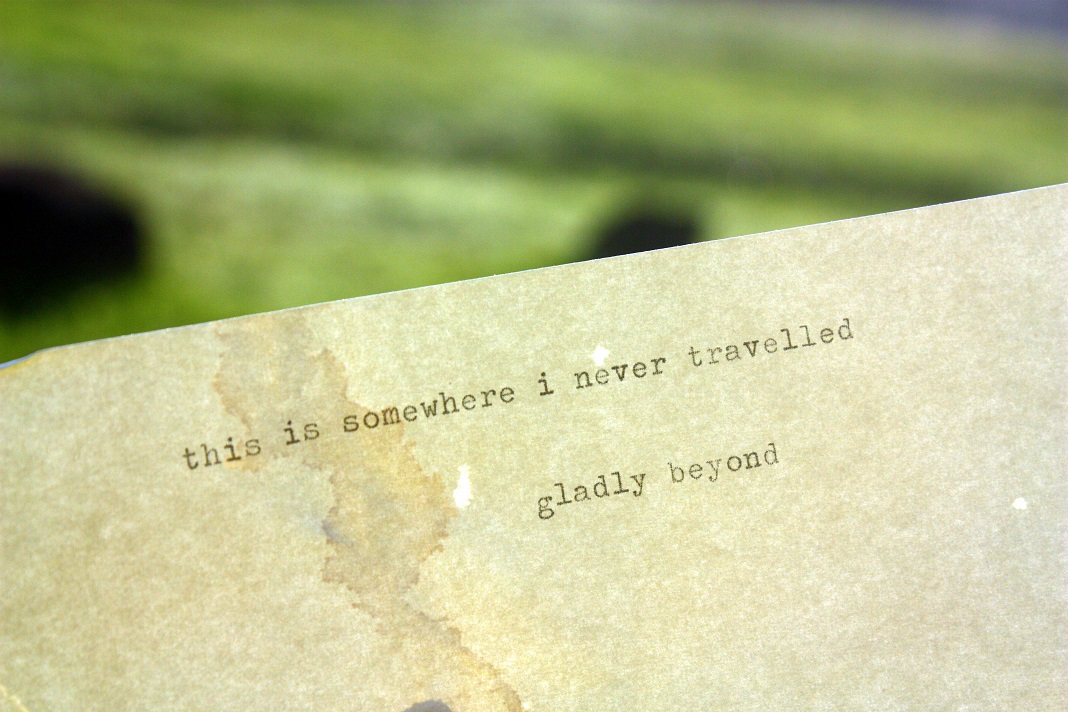