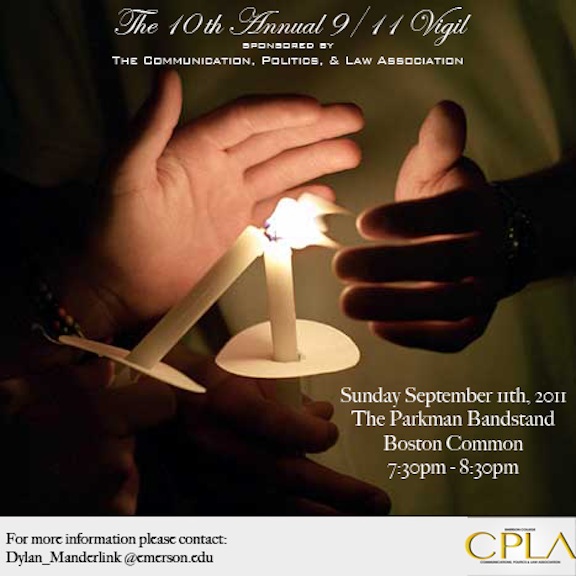 10 years to this day. 10 full years have passed since the World, the US and New York city fell victim to extremist, fundamentalist, terrorist attacks…and where are we now?

I can tell you exactly where I was 10 years ago: Portugal, a 9 year old, sitting on the school bus, laughing and celebrating the end of a school day…and anxiously awaiting the weekend to celebrate her 10th birthday. It was no yellow school bus but a kind of coach, with 80’s beige leather-covered chairs and décor inside. Our driver was probably as old as the bus, but us young schoolkids were having a blast breaking all the rules: standing up, walking down the aisles, talking at the top of our lungs, fighting to sit at the back where all the cool older kids were… all to end in silence at the sound of a newly purchased Nokia 350 cell phone.

Almost 4pm, European GMT time, about halfway through our dropping-off-kids-at-home-route, my friend, Daniel Fury’s phone went off. Even with a slight reluctance to pick up the call (no middle-schooler picks up calls from “MOM”), something within himself was telling him to pick up…and so he did. In a matter of seconds the entire bus fell silent: standing beside him, hearing his mothers panic through the phone, noticing his body language shift to an embodiment of vulnerability, pain and complete emptiness I began to realize something wasn’t right. Like a statue frozen in time, Daniel stood, completely pallid, hunched over the chair in front of him as tears began to roll down his face. Daniel is American.

Time had stopped for about a minute when simultaneously the few other cell phones on the bus began buzzing…the driver had in the meantime changed the radio station to the news.  The Portuguese words were just sounds in my mind: I can’t remember thinking straight thoughts but just a rush of sounds, letters and images, trying to piece together what was going on in the world.  It wasn’t until I got home that I realized exactly what had happened. At the turn of my key through the lock, I could hear my mother calling my name, and telling me to hurry up. As I pushed the front door open, images of the two world famous towers I had learned about in school were shattering on the TV screen. I couldn’t believe my eyes. With my mother tearing up in front of me on the couch and her frantically trying to contact the only cousin abroad…in New York…I realized that my life, our life, the life of our global community would forever be changed.

I can tell you where I am now, 10 years on: a Political Communications student, sitting at the Thinking Cup, organizing Emerson College’s 10th Annual 9/11 Vigil for Sunday. I say 10th annual because it began on the night of the attacks, back in 2001, when a dear Emerson alum, Tita Pupolo, found out her mother had been sitting on that first plane, American Airlines flight 11, only two seats behind Mohammed Atta. Since that small gathering between friends and Emerson professors that night, we as a student body have made a huge effort to prepare, every year, a vigil to remember not only Tita’s mother but everyone else who was involved or lost their lives in the events. Personally, the beauty of this vigil, and the remembrance of 9/11, comes from a deeply rooted sense of loss to our global community. I don’t think I’ve ever been a part of something that brings so many people together.

September 11th 2001 saw a huge shift to our globe, be it politically, socially or even geographically…every single person in the world was affected, and now, those of us still here, living in the shadow, can show our respect, and our commitment to overcoming Arab and Muslim fears and prejudices by coming together on this day. We live with the aftermath of these attacks, and no matter our attempts to escape them we cannot. I cannot imagine how our world would be like today without these attacks, but I do know that tomorrow and in the future we will bridge the large gap we’ve created between the Arab (Muslim dictated) and the Western world. I do not believe in racism or cultural/religious segregation, I’m a huge advocate for international and intercultural communication and understanding, so I have hope that one day we’ll be able to see the light beyond our life in this shadow. 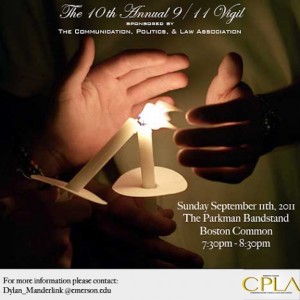