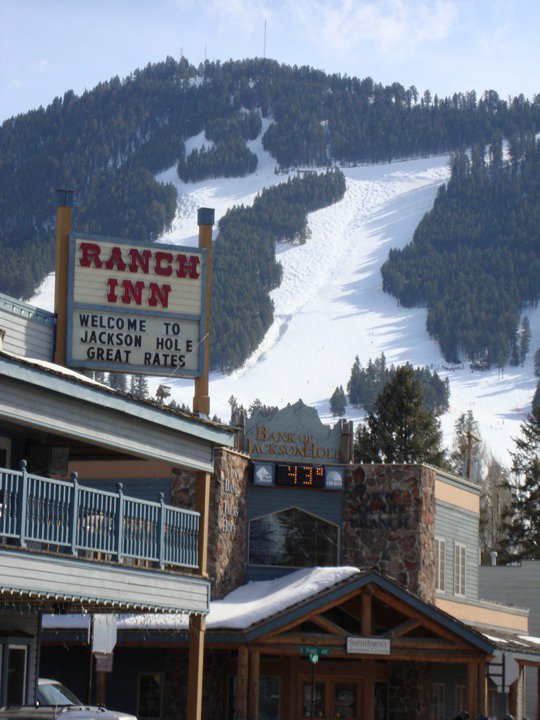 This is my first time out west (minus Southern California and a brief visit to North Dakota to visit family). I stepped off the plane and there it was: flat, flat, flat, flat plains and then a HUUUGE mountain range. 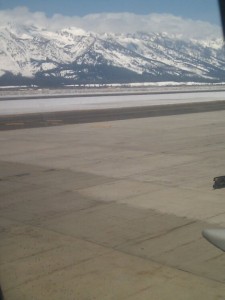 First thing I see after touching down. Flat, flat, flatness. Then MOUNTAINS!

My first question: “So, where’s Brokeback?”

Jackson Hole is a gorgeous area in the middle of nowhere. Waiting for the rest of my family to land from their respective flights in about five hours, I decided to head into town and see what there was to offer. I lucked out with a fabulous taxi driver named Jim (or Tim?) who also used to be a tour guide at Yellowstone. He told me loads about Wyoming’s history and culture.

“So, where does everyone live?” I asked him.

“Everyone who?” He shot right back. “This is the least populated state in the country.”

With 500,000 residents (not including the 300,000 visitors in the winter and two million in the summer), Wyoming is certainly pretty empty. But what it lacks in people it makes up for tenfold in natural beauty. Driving along the street, you are much more likely to see elk, horses, cows, or a combination of the three instead of another car. That’s my experience so far, anyway. 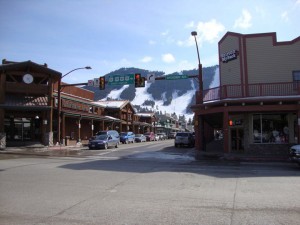 Meet you at High Noon: Jackson, WY is like a scene from an old-fashioned Western

fabulous availability of free wifi and credit card acceptance, pictures scattered around Jackson’s various restaurants and parks show that it really hasn’t. Cowboy saloons and furniture stores with stuffed taxidermied animals pepper Jackson Square, a small green (well, it was white right now, but I’m sure it’s green in the summertime) with four huge arches made of antlers at each entrance.

Day One I spend walking around the cute little shops- Native American jewelry, lots of Jackson Hole t-shirts with moose on them, and a great collection of tacky postcards (one that I send to Afghanistan right away). Everyone is very friendly, offering help when they’re not tourists themselves, hoping you can take a picture. Jim (or Tim) tells me to check out Billy’s Burgers, a tiny diner with the best hamburgers in town. From there, the town is magic. 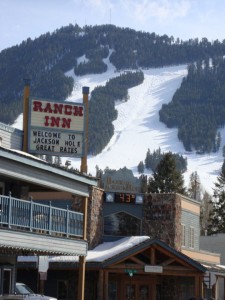 My head hurts a little- we’re over 6,600 feet in altitude. I’ve never been driving around so high up before. I contemplate going for a run. If I do some exercise here, it’ll be like heaven when I return to DC and my body gets an oxygen high.

Next week: my first day on the ski slopes (get ready). And a week after getting back from 30-degree Jackson, I’m heading right to 90-degree Haiti. Talk about a shock to the system!