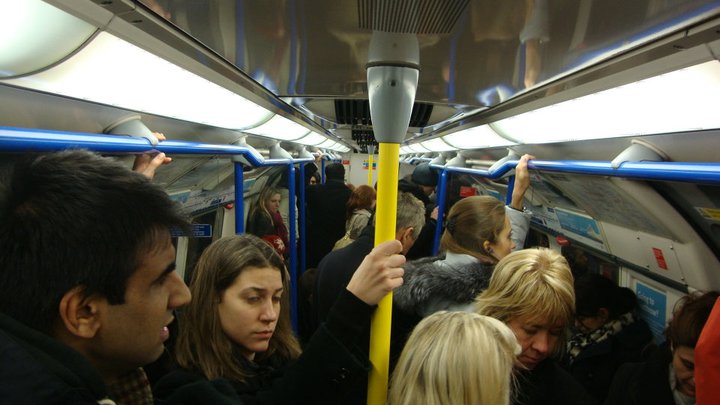 As a frequent traveler into central London, I’ve had quite a few interesting Tube experiences. They are rather rare, considering how often I use the Tube, because most of the time everyone on the Tube avoids eye contact with strangers. As I sit or stand, everyone else is quite firmly focused on their thoughts. But there are some gems in my experience and here are a few:

I have never worn fake eyelashes. I have also never noticed someone wearing them until one day on the Tube when a woman took off her eyelashes. I cannot lie. My reaction was a bit unseemly and I stared at her as she pulled them off her eyelids. I have seen many women do their make up on the Tube but never did I expect to see someone peel off her eyelashes. The man next to her looked incredibly uncomfortable, ready to curl into the fetal position, in fact. She then proceeded to dig out her mascara and happily paint the fake eyelashes with all the mascara she had. It was fascinating in a bizarre way. The application or removal of makeup has always seemed an incredibly private process to me. After seeing that, however, I will never blink an eye at a woman applying her makeup while on the Tube or in a waiting room again.

The tube on a Wednesday evening. Taken by my friend Daphne

Lingerie seems, to me, to be something you wear to please yourself or to please a certain someone. Either way, it’s another thing I view as private. I don’t understand the desire to flaunt undergarments or lingerie. One woman was sitting on the Tube with bags of shopping surrounding her. She was obviously pleased with her finds. She was so pleased that she pulled out one item — it was a lacy pale pink corset top. Immediately, her neighbors and the people sitting across from her focused upon what she was doing. She delicately, and happily, fingered the material and checked the under-wire, quite obviously reveling in such a fine purchase. I don’t think I’ve ever seen such a mixed bag of reactions from people on the Tube before!

My friends and I were going out and squished ourselves onto an incredibly crowded train. I, unfortunately, got separated from the group and was sandwiched between the doors and a pair of French girls. As the Tube moves along its path, one of the girls’ hair, up in a messy bun, keeps hitting my face. And since I don’t particularly enjoy the experience of eating hair, I try to curl even further into the corner. She, suddenly finding another inch of space behind her, moves back. I am left suffering every time she moves the slightest bit. Three men, obviously good friends, were standing on my left–providing the other wall to my sad little box–and see my discomfort. Unfortunately, there isn’t enough room for them to find a way to maneuver me into a more comfortable position. They smile sympathetically and I feel a bit better for at least having witnesses to share my misery with. At the next few stops, people pile out but few pile in, allowing the men to move back and help me breathe air that has not been filtered through this girl’s hair. Eventually the girls left. One of the men pulls out a package of mints and offers some to his friends. With a friendly smile, I am included and offered a mint as well!

On Guy Fawkes night, I jumped onto the Tube to head back to my campus and was quite alone. I was not particularly worried about traveling alone, just about being sleepy. Again, the Tube was crowded and I leaned against a wall, hoping I didn’t doze off. A man got on and stood next to me. We had smiled at each other as we stood on the platform waiting for the Tube to arrive. We had both been rudely pushed aside by some rambunctious, buzzed revelers but took it in stride. As the Tube reached his stop, he grasped my arm and said, “Good night, love”. It was sweet–and helpful!–as he helped me stay awake, and a fantastic end to a night of fireworks, friends and exhaustion. And not at all creepy.

As a rather unsophisticated girl, I had never heard of Harrod’s until I came to London. Nor did I particularly care to go see it. I was quickly told that it was a must-see and even though I might not be able to afford much there, as a foodie I had to visit the Food Halls. On the way there, my friend and I managed to nab some seats. As he took a quick doze, I not so subtly read the newspaper of the businessman next to me. He soon left, however, and a new man took the seat next to me, only to get a look of disgust and walk away rubbing at his lower back and bottom. In complete confusion, I looked at the seat next to me and at the man leaving. There could only be one explanation for his actions. The seat must have been wet! But how did the man before sit on it? As I attempt to puzzle this out, a man sitting across from me had observed the entire situation and was just as puzzled/entertained as I was. We smiled in recognition of a fellow keen observer. He then motioned over to my friend who was dozing in that head-bobbing way and smiled wider. I smiled, shrugged my shoulders and settled in for the ride.

I am not a personal fan of the London Tube. But, as with all public transport systems, I love watching the people on them. People take for granted the amount of entertainment and knowledge that can be gleaned on a simple Tube ride. Always observe your surroundings and appreciate them!