The train took two hours longer than expected and really would not have been that bad if we understood what was going on.  And maybe it would have been nice if we had remembered to bring snacks other than our ‘Orbit’ gum.  But honestly, I did not care a bit that we were drenched in sweat and sleepy, because our train for Wien (Vienna) and I was ready for regal beauty in Mozart’s old stomping grounds.

Our first morning in the city- after a night of freak hail storms- was spent in the traditional Viennese style; at brunch.  It was a simple meal with to die for coffee, that was nestled in an adorable vine-covered courtyard.  Young families passed babies off to friends, and older couple read bits of the local paper aloud to each other.

A night at the museum

For some unknown reason, this had become the city of museum visits extraordinaire for me:  I had been to the Prado, enjoyed the best in the mid-west (thank you, Chicago), and fell for Paris.  Wien had become my museum mecca.  I was on a mission to find the Klimt mother load and I was not going to leave the city disappointed.

Step 1:  The Leopold Museum, post-brunch.  The building itself was imposing, let alone their collection.  Room after room was filled with stunning works and tourists from all over the world.  But alas, there were fewer Klimt works than I had been lead to believe.  After the amazing beauty we enjoyed indoors, we took in the sunshine outdoors in the garden, and tried not to be too mischievous.

Outside of the Albertina Palais Museum

We both wanted to visit the opera or potentially the Vienna Boys Choir, but decided that our shabby-chic looks would not quite make the cut, so I instead inquired about common past times in Wien for early June and found out that swimming in the river was quite popular.  So off to the ‘beach’ we went, bathing suit already on.  The train let us off right near a bank of the river and did not take me long to jump into the river with my travel buddy looking on.  As I swam in the water with the other older gentlemen, I realized where I was– I was SWIMMING in the Strauss’ BLUE DANUBE!  I dried in the sun and thought that my music teachers would be proud.

Step 2: The Albertina Palais Museum.  While my travel partner rested, I went to the Albertina which was beautifully situated in the center of town.  I also remembered enjoying the reduced ticket price for students and the pistachio/nutella gelato I had as a snack.  No Klimts in sight.

A dip in the Danube

Step 3:  The Belvedere Palace.  Finally, I got to see some of Gustav Klimt’s expressive works and they did not let me down.  I must have spent 15 minutes enjoying each piece the museum featured until we were both so exhausted that we needed another ice cream, just to keep on going.

Our time in UpEurope was coming to an end, and we were heading back home to Barcelona.  I was even excited to take my exams and finish my time at the university.  Come on paper writing- give me your worst!  Barcelona even smelled better, but I still long for swims in Wien, long walks in Prague, and rhinos in Berlin. 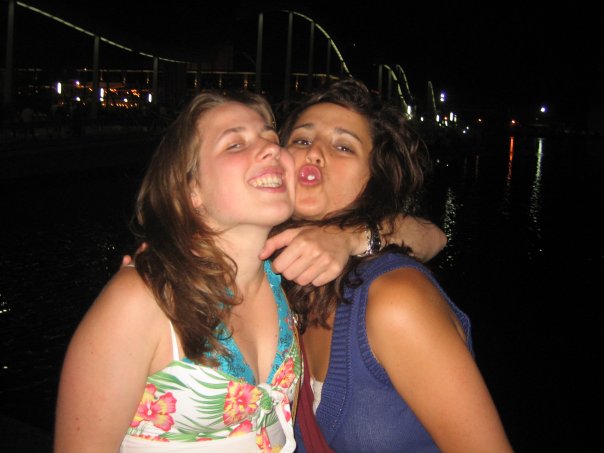