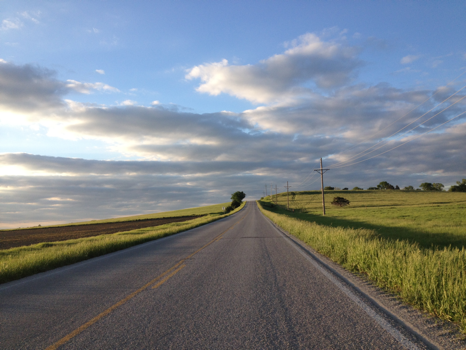 When my mother returned to her roots in Lawrence after spending 20 years raising me in the Middle East, I found myself an unwilling expatriate to the endless plains. Although I was born in Lawrence, I’d only visited it twice since then. At first glance, a small town in Kansas doesn’t promise much to a city girl like me. But in the three years and six visits since my mom’s move, I’ve come to appreciate Lawrence for its unusual mix of small-town charm and hip collegiate vibe.

In recent history, Lawrence’s claim to fame has been the University of Kansas men’s basketball team. The ROCK CHALK JAYHAWK battle cry echoes throughout spring, and KU memorabilia thrive year-round. Although I have yet to attend a KU basketball game, fans say few activities beat the excitement of witnessing the team in action in Allen Fieldhouse.

But Lawrence first became known for the violent abolitionist John Brown, whose bearded face and crazed eyes you may have seen in a history textbook. The Sunflower State is proud of its anti-slavery stance, and you’ll see “Free State” slogans around town almost as often as the familiar Jayhawk logo. When my mom told me this on my most recent visit, I couldn’t believe that I’d spent 24 years not knowing that my hometown was a seat of progressive thinking. I pondered that piece of history, and more, at the Free State Brewery on Massachusetts Street, which has been a local favorite since 1989. Their Wheat State Golden brew is delicious year-round.

Speaking of Massachusetts Street, take a stroll down the main drag and you’ll cross paths with some great characters: the man holding the “Honk for Hemp” sign, rain or shine; the dude with his mannequin girlfriend ever at his side; the jazz saxophonist who plays into the night, without breaks. Here is where you can pick up souvenirs, like the classic “Lawrence Effing Kansas” t-shirt, available at the Kansas Sampler, or any similarly cheeky apparel at Acme T-Shirts or the Jock’s Nitch.

For a pit stop, check out the vibrant food scene on Mass St. Although it’s not Kansas City, Lawrence boasts some finger-lickin’ barbecue at Buffalo Bob’s Smokehouse BBQ. If you’re in the mood for something a little classier, walk next door to 715, a New American-Italian fusion restaurant, with fresh takes on classics like risotto and delectable desserts. No matter what, make it a point to get ice cream from Lawrence’s own, hand-churned Sylas and Maddy’s, at 1014 Mass. It’ll cool off any hot summer night the way only homemade ice cream can.

Once you’ve had enough of the city, hit the road out of town on Old K-10 where you’ll experience first-hand those spacious skies and amber waves of grain we sing about each Fourth of July. Here is the Kansas I dreamed about, the part of Kansas you might see in pictures or the Wizard of Oz. You can head to Pendleton Farms, where you can pick your own asparagus in the spring and apples in the fall (country basket optional). Or you can keep driving and just take in the scenery.

Last stop on our tour: take the road to Well’s Overlook Park, donated in 1971 “for the enjoyment of the people.” And enjoy it you shall: just climb up to the top of the tower and look out over the plains of Douglas County. The land is unexpectedly hilly and green, and I think I finally understand how smoke signals must have worked back in the olden days.

On your way down from the tower, you’ll see a curious sight. Etched into the wooden scaffolding is a gloomy graffiti judgment: “Your greatest dreams are sub-par and uninspired. Give up.” But just after that period, someone added a faint but defiant postscript: “Haters be hatin’. Big dreams be waitin’.” In between wide open sky and Midwest chic streets, you just might find a big dream waiting where you least expect it.

Join us to Celebrate in Chicago on August 15! 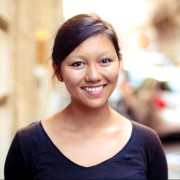 Julia Shew
Julia is a native Kansan, but lived in the United Arab Emirates for 18 years before returning to the US for college. She is fascinated by travel and its influence on personal identity, which, for her, usually translates into eating, drinking and dancing her way to self-actualization.